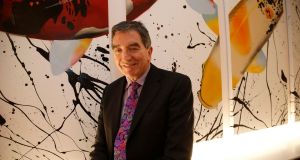 The Government needs to show a degree of “flexibility” on the Brexit backstop issue “sooner rather than later” to prevent a hard border, according to Niall FitzGerald, the Irish-born, UK-based former head of Unilever.

Mr FitzGerald was speaking on Thursday at the Dublin offices of the British Irish Chamber of Commerce, of which he is a patron.

He said he is generally supportive of the Government’s stance in the Brexit talks, where the State has maintained there must be a legally binding backstop guaranteeing no hard border, with no limit, tying the North and Britain to customs arrangements until such time as a trade deal is agreed at some point in the future.

Mr FitzGerald, however, said this stance could eventually bring about the “hardest of hard borders” if it is the cause of no agreement.

“What you don’t want is to leave it so late in the day that the rest of the European Union turns around, maybe on March 28th [the day before the withdrawal] and tells Ireland that we are the only impediment to an agreement,” he said.

“Some degree of flexibility needs to be introduced into this. It needs to happen sooner rather than later.” He said he did not know precisely what that flexibility should be, but that the governments should look at a longer transition period.

Mr FitzGerald said that on a scale of one to 10, he rates the chances of a hard Brexit, where the UK crashes out without any agreement, at “a three or a four”.

“I worry that there is not enough of a focus [in Ireland] that a hard Brexit is now a distinct possibility,” he said. “For trade, I have not seen anything as difficult or as dangerous as the current situation in my business life, which began in 1970.”

He said the Border issue needed to be sorted out “before late January” at the latest. “And once it is decided, Ireland needs to get stuck into helping the UK. Ireland should then be seen as an ally of the British, helping them to get trading arrangements that are as mutually beneficial as possible.”

The Limerick native, who was made an honorary knight by the British in 2002, worries that a “hard core of 60 or 70 Brexiteers” in the Tory parliamentary party are so ideologically committed, “they do not care what damage is done”.

“I have had some Brexiteers come to me to say that this is a ‘purification process’, that Britain has to feel some pain. I think that’s really scary. It is heartless, fraudulent, dishonest, and it lacks any integrity. The people who were saying this to me are those who will be unaffected by the economic consequences.”

Mr FitzGerald was critical of the efforts made by the business community during the Brexit referendum campaign, and he said industry leaders were “too slow to engage and overcautious in expressing viewpoints”.

He said the Tory party now appears to be unwilling to listen to business. The British prime minister, Theresa May, he believes, “has no interest in business . . . she doesn’t understand it.”

“Look at the top rung of the Tory party. Very few have a strong business background. There is no business voice within cabinet, even. It is the way politics has gone. If you want to be a career politician, you have to start early to climb the ladder. That doesn’t give you much time to develop another career first.”

Mr FitzGerald said the problem is that societies then end up with “professional politicians, rather than representatives of people”.

He rejected the idea that running a second referendum would be anti-democratic just because a vote had already been held in 2016.

“That’s complete nonsense. If they do have another vote, it is probably nine months away by the time you get an act of parliament, go the election commission, and get ready for it. That means it will have been three years since the last vote. Does a vote three years ago have to decide the issue until the end of time? It would be wholly democratic to run it again, know that everybody knows the consequences. People could vote the same way again if they wanted to.”

He said he had no idea how the current impasse would be resolved, but he suspected there would eventually be an agreement based on “a cobbled-up version of what is already on the table”.

“If the chamber didn’t exist, with the way things are now, you’d have to invent it,” said Mr FitzGerald.