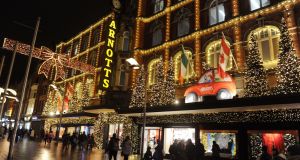 Christmas lights in Henry Street, Dublin: Tax receipts estimated by EY to rise by 4.2 per cent next year, buoyed by a strong labour market and a rise in consumer spending.

Ireland will be among the world’s strongest-growing economies in 2019 with gross domestic product (GDP) set to rise by 4.2 per cent, according to economic predictions published by EY-DKM Economic Advisory on Friday.

The predictions include the addition of 60,000 net jobs in the Irish economy with increased employment forecast in the retail, restaurant, leisure and housing industries. High wage inflation was identified as the biggest risk to hiring by businesses. The report predicts that wages will grow by 2.9 per cent next year.

“In the spirit of the season, Ireland should celebrate the success of 2018 but some new year’s resolutions will be necessary to stay fit and healthy for what lies ahead,” said Neil Gibson, chief economist at EY Ireland.

The outlook for 2019 continues to be clouded by Brexit. The “financial, economic and confidence implications” of a hard Brexit would be “large” in the short term, said Dermot O’Leary of Goodbody stockbrokers. However, he predicted the medium-term impact would be “less severe”, as increased foreign investment in Ireland offset reduced trade.

The figures assume that the UK will ratify a Brexit deal leading to a transition period during which the existing UK-EU trading relationship would remain unchanged. A “hard” Brexit would negatively affect Irish economic growth and would be “particularly damaging for rural Ireland,” said Mr Gibson.

Despite concerns about the health of the global economy and Brexit uncertainty, Ireland enters 2019 “in a position of strength,” Mr Gibson said.

Total tax receipts are estimated by EY to rise by 4.2 per cent next year, buoyed by a strong labour market and a rise in consumer spending. However, an international slowdown could hit the State’s finances by reducing corporation tax receipts.

Strong performance in the housing sector is also predicted with demand expected to be boosted still further by net immigration. Over 25,000 housing units are set to be completed in 2019 and house prices will increase by 4 per cent, according to the figures.