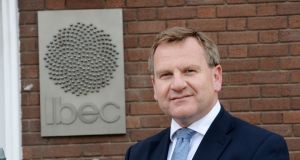 Ibec chief executive Danny McCoy: ‘Fundamentally this is an economy that is up and open’. Photograph: Alan Betson

Ireland is likely to emerge as one of the top performing economies in 2020 despite the Covid-19 crisis and the pick-up in unemployment, the chief executive of employers’ group Ibec has claimed.

Danny McCoy said there was a prevailing economic narrative here, which suggested that the “sky had fallen in” but this was a “false reading” of the situation and underestimated the forces driving the Irish economy.

While certain consumer-facing sectors such as hospitality were struggling others such as tech and bio-pharma were booming, he said.

The smaller-than-expected contraction in economic activity in the second quarter – gross domestic product (GDP) fell by 6 per cent compared to a euro area average of 12 per cent – was a reflection of this, Mr McCoy said.

“GDP may not be perfect but it’s actually capturing in essence what we see in the business community, which is that move towards the intangible asset base, which has effectively given rise to a 100 per cent growth in GDP,” he told the annual conference of the Dublin Economics Workshop (DEW).

“Fundamentally this is an economy that is up and open. It has been dislocated and there are issues around that but data doesn’t lie,” he said, highlighting the resilience of income tax and corporation tax in recent exchequer returns.

He said the massive onshoring of assets combined with a pick-up in investment had resulted in a step change in the economy’s productive capacity.

Investment by Irish-based companies in 2019 was €110-€120 billion, equivalent to €2 billion a week, a bigger per capita investment than anywhere else in the world.

“This is an economy that has a capacity for recurring income and activity for quite a number of years to come because of the scale of investment that has taken place over the last decade,” he said.

“The base effect and the momentum that’s underneath the economy is missing in a lot of the conversations that economists are having about how Ireland is experiencing Covid in contrast to other jurisdictions,” Mr McCoy said.

“This is not to deny the stress that is in those sectors that have been denied a living, particularly hospitality and tourism,” Mr McCoy said.

But even in the beleaguered tourism industry, he said, the pick-up in Irish families taking the staycation option had resulted in an increase in spending as Irish people tended to spend more on a night out than their foreign counterparts.

He also noted that the sizeable jump in unemployment here – it hit a pandemic peak of 28 per cent in April – reflected the strength of the public finances and the level of subvention that the Government channelled to impacted workers.

He said 38 per cent of workers on the Pandemic Unemployment Payment (PUP) experienced pay rises during the crisis.

“So we’ve seen this huge pendulum shift of pushing resources from the State into households,” he said.

While the conventional channels of output and consumption have changed, Covid-19 has not resulted in a structural change in the Irish economy, he said.

“Against that backdrop we need to properly assess where we are and dispense with the sky has fallen in narrative,” he said.

“ There is every chance that when you look back on the year 2020 from a future date the casual observer will not even see a Covid-effect in the Irish GDP numbers,” he said.