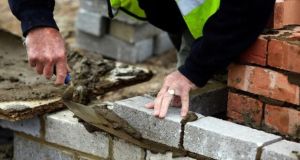 Many would-be buyers never get to the stage of buying and calling on the Government for the tax break.

Less than half the applications for the Government’s help-to-buy scheme never make it to the claim stage, figures from the Revenue Commissioners show.

The scheme, which provides tax rebates to first-time home buyers of up to €30,000 or 10 per cent of the value of the property, has attracted just over 42,000 applications since its inception in 2016.

However, only 19,000 of these applications have progressed to the claim stage and an actual rebate for the buyers.

“Applications will progress to the claim stage only if the applicant decides to purchase a property that is eligible for the scheme,” the Revenue says.

“ Many applications may never progress to the claim stage because the applicant does not purchase a property or purchases a property not eligible for the scheme,” it says.

Sources suggest the gap between applications and claims is likely come down to the difficulty first-time buyers have in securing a property and to a lesser extent eligibility criteria. In other words, applications are made while the buyers are hunting for a house but many would-be buyers never get to the stage of buying and calling on the Government for the tax break.

This is almost certainly linked to the problem of getting a home for the right price, in the right place, a problem germane to every housing market, but doubly so for Ireland, where supply has been constrained for several years and prices are a gross multiple of average incomes.

The figures, provided by Minister for Finance Paschal Donohoe, in response to a parliamentary question from Sinn Féin’s Eoin Ó Broin, also show that more than 40 per cent of first-time buyers who have availed of the scheme already had the necessary deposit to secure a mortgage.

They indicate that 7,928 of the 19,478 approved claims to date were made by households that had a loan-to-value ratio of less than 85 per cent. This means they already had a deposit of at least 10 per cent, underscoring criticism that the scheme maybe too generously priced and supporting transactions that would have taken place anyway.