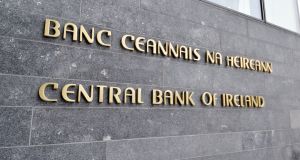 Loan default rates among small and medium enterprises (SMEs) in the Republic have broadly declined, although confidence appears to be weakening given the overall fall in new lending.

An exception to the general dip in defaults was the professional, scientific and technical sector, according to a report from the Central Bank of Ireland.

“The default rate for Ireland has fallen from the highest in the sample in 2014 to the third highest in 2018. This is driven by a combination of factors including an improving economy, higher asset quality of new lending, restructuring and resolution of loans, and portfolio disposals.”

The Central Bank’s report - SME Market Report 2019 - detailed how gross new lending to small businesses fell 1.7 per cent in 2018. Some €2.4 billion of the €15.5 billion total was accounted for in the hotel and restaurant sector while €3.5 billion went towards wholesale, retail, trade and repairs businesses.

An annual decrease of 15.9 per cent was seen in the manufacturing sector while the construction sector increased new lending by 34.5 per cent.

And that fall in new lending is coupled with a decline in the volume of SMEs seeking out a loan. Just more than 20 per cent of SMEs applied for bank finance in September 2018 compared to 25.7 per cent in the previous survey. Demand amongst “micro” companies was lowest.

Nevertheless, bank finance rejection rates have stabilised recently at about 15 per cent from more than 20 per cent in September 2013.

The Central Bank’s data shows that lending is concentrated amongst the Republic’s largest domestic banks. Market share among the top three lenders was 90.3 per cent in the fourth quarter of 2018.

The report, released annually, monitors development in the provision of credit to SMEs drawing on a range of data sources.