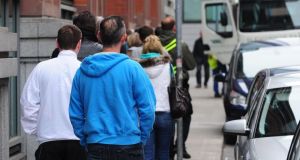 The National Youth Council of Ireland has expressed concern that more than 10,000 under-25s are now among the long-term unemployed. Despite the fall in unemployment generally, the council said, the Department of Social Protection last month recorded 10,624 young people on the live register for more than a year. “This figure is still far too high, and more needs to be done,” the council’s deputy director, James Doorley, said.

Mr Doorley welcomed a Government announcement that a new youth employment support scheme would be introduced in 2018. “The programme aims to provide long-term-unemployed young people with the opportunity to learn basic work and social skills in a supportive environment while on a work placement,” he said. “With more jobs becoming available there is a great opportunity to assist this cohort of young people to transition back into the labour market, but that can only be achieved with the full and committed implementation of the scheme.”