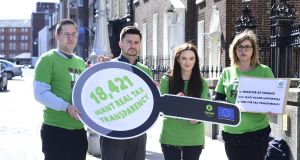 Oxfam campaigners outside the Department of Finance earlier in 2017 to call on the Government to implement transparency where large companies make profit and pay tax. Photograph: Cyril Byrne

Ireland is among the most active countries in facilitating corporations moving profits to low- or zero-tax destinations, according to a new report from Debt and Development Coalition Ireland.

The State is also responsible for imposing the largest losses in corporation tax on developing countries with which it has double taxation treaties, according to the report entitled Tax Games: the Race to the Bottom – Europe’s Role in Supporting an Unjust Global Tax System 2017.

Using a traffic-light system to rate 18 EU member states as well as the EU Parliament and the European Commission, Ireland is one of just two states to show as red in all five categories – transparency on beneficial ownership; support for country-by-country reporting; tax treaties; harmful tax practices; and global solutions. The Netherlands was the other.

The report says EU governments and institutions are engaged in a “race to the bottom” on corporate taxation, “including through lowering corporate tax rates and using harmful tax practices that facilitate corporate tax avoidance”.

Of all the countries covered, the Irish tax treaties with developing countries introduce the highest average reductions on the tax rates of their developing country treaty partners, at about 4.75 percentage points, the report says.

Three recent Irish double-taxation agreements – with Zambia, Pakistan and Ethiopia – are cited in this regard. The report notes that the first two have been signed since a 2013 “spillover analysis” designed to measure the impact of such agreements on developing countries.

Earlier this year, the report notes, Minister for Children and Youth Affairs Katherine Zappone told a Government-organised summit on fairness, responsibility and leadership on corporate tax: “We need to acknowledge the negative influence our former tax policies have had on developing countries and move forward expecting more from ourselves.”

Ireland also fares particularly badly where the report looks at countries that act as “sinks” – generally small jurisdictions with a low- or zero-corporate tax rate, where multinational corporations store capital – and “conduits”, which facilitate the movement of capital from countries where companies actual do business to “sinks” without paying much, if any, tax.

It cites research carried out earlier this year on uncovering offshore financial centres, which named Luxembourg as the top-ranked sink state, followed by Hong Kong, the British Virgin Islands, Bermuda and Cyprus.

Ireland was ranked as the fourth most prominent conduit country – behind the Netherlands, the UK and Switzerland, and ahead of Singapore. The report says conduits tend to specialise in relations with particular geographies. In Ireland’s case, it is seen as specialising as a link between American and Japanese corporations and Luxembourg.

The report assesses countries’ performance on “global solutions” on the basis of whether they support the creation of an UN intergovernmental tax body. Harmful tax practices include the use of special purpose entities, patent boxes, advance tax agreements with companies, letterbox companies and conduit activity.

The Eurodad report is published on the day European finance ministers are expected to publish the EU’s list of global tax havens. The EU study examines only states outside the EU.

It also follows reports from Christian Aid and Oxfam that were similarly critical of Ireland’s behaviour on corporation tax, and comments from Nobel Prize-winning economist Joseph Stiglitz that Ireland’s tax deals with the likes of Apple help fuel global inequality

The study makes 15 recommendations, including the ending of certain tax practices, renegotiation of tax treaties with developing countries on fairer terms and greater transparency.