‘Mutually beneficial agreement’ will be positive for both economies, Phil Hogan says 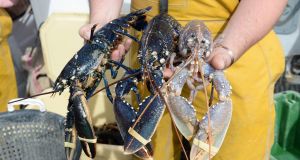 Under the agreement announced on Friday, the EU will eliminate tariffs on US lobster products, worth about $111 million (€94 million) a year. Photograph: Dara Mac Donaill / The Irish Times

The United States and the European Union have agreed to reduce tariffs on a range of products - a rare example of trade cooperation between the two blocs amid ongoing transatlantic tensions.

Under the agreement announced on Friday, the EU will eliminate tariffs on US lobster products, worth about $111 million (€94 million) a year.

In turn, the United States will half its tariffs on a basket of EU products, including glassware, certain prepared meals and cigarette lighter products up to a value of $160 million (€136 million).

The agreement still must be signed-off by EU member states and the European Parliament.

“This mutually beneficial agreement will bring positive results to the economies of both the United States and the European Union,” said EU trade commissioner Phil Hogan and US trade representative Robert Lighthizer in a joint statement. “We intend for this package of tariff reductions to mark just the beginning of a process that will lead to additional agreements that create more free, fair, and reciprocal transatlantic trade.”

The deal was announced even as significant trade barriers remain between the two blocs. The United States has yet to remove punitive steel and aluminum tariffs introduced in 2018 against the EU. Similarly, the ongoing dispute over aircraft subsidies has resulted in the US imposing around $7.5 billion worth of tariffs on a range of EU products, including Kerrygold butter and Baileys liquors.

The US was given the green light to impose the duties of up to 25 per cent after the WTO ruled that Europe had not complied with an order to end illegal subsidies to aircraft manufacturer, Airbus.

But Brussels has argued that the United States offers similar subsidies to the US aircraft manufacturer, Boeing, and is awaiting a judgment from the WTO on this later in the year. Discussions between the two sides about some kind of compromise has yet to yield any solution.

A review last week by the United States Trade Representative (USTR) updated the list of products subject to the Airbus-related tariffs. Minor adjustments were made, with some cheeses and biscuits removed from the tariff list, but duties added to other products such as jam. The Irish Whiskey Association welcomed the fact that 99 per cent of Irish whiskey remained free of tariffs following the review, even as Scotch whisky is subject to tariffs.

The agreement announced on Friday signals an effort by both sides to signal they can cooperate on trade matters. The US remains in a trade war with China as relations between the two countries remain at a low. Last week he said he had cancelled trade talks with Beijing over the coronavirus, which he blames on China.