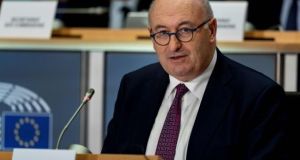 EU Commissioner Phil Hogan has warned Britain that negotiations with the United States over a trade deal post-Brexit will be more difficult than expected.

“It won’t be as easy as the United Kingdom thinks,” he said in Washington. Asked at an event at the Centre for Strategic and International Studies if there was a need for trilateral negotiations between the US, UK and the EU on the issue, Mr Hogan replied: “There’ll be no three-way negotiation. That’s a matter for the United Kingdom and the United States.”

Mr Hogan was speaking during his first visit to Washington since his appointment as the EU’s trade commissioner.

He said that discussions he had this week with senior figures in Congress, including on the Ways and Means committee, suggested that talks between the US and the UK will be more challenging than expected.

Mr Hogan also criticised British Prime Minister Boris Johnson for putting a timescale for the conclusion of a trade agreement between the EU and UK. “Prime minister Johnson I think unwisely decided that he wants a deadline again,” he said.

“Gamesmanship and brinksmanship is not going to work on this occasion.”

Noting that the Conservative government has a majority of eighty, he criticised the decision to impose a timeline on the next phase of the negotiations. “What we got instead was a cliff edge again.” Mr Johnson is expected to visit Washington next month.

Mr Hogan also warned that the EU is poised to impose tariffs on the United States over the ongoing Boeing-Airbus dispute.

Speaking in Washington, Mr Hogan said the EU regrets the “choice of the US to move ahead with tariffs in the Airbus case, and the recent announcement to potentially subject additional EU products to tariffs”.

“This leaves the European Union with no alternative but follow through with our own tariffs in the Boeing case,” he said, predicting that the WTO will rule that the US illegally subsidised aircraft manufacturer Boeing in May or June this year.

His comments may presage a significant escalation in trade tensions between the EU and US.

The Trump administration late last year imposed punishing tariffs on EU exports following a WTO ruling which found that the EU and European countries had given Airbus illegal subsidies. Last month Washington warned that it could impose further sanctions, which could hit Irish products such as whiskey which were exempt from the original tariffs.

However, Mr Hogan warned on Thursday that the EU will impose its own tariffs on American products as it awaits a parallel ruling from the WTO on Boeing in May or June. In a speech to the Centre for Strategic and International Studies in Washington he called on the United States to negotiate. “We have a joint responsibility to sit down and negotiate a balanced settlement, so that we can leave these disputes behind us. The EU has shared concrete proposals with the US on dealing with clearly identified aircraft subsidies and on future support to our respective aircraft sectors.”

Mr Hogan also hit out at the United States for its characterisation of the trade imbalance between the European Union and the United States, stating that the United States has a $60 billion trade surplus with Europe. Mr Hogan said that Europe “must call out the narrative that the US has a trade deficit or an unfair trading relationship with Europe.” “In the interest of transparency and fair play we need to measure our trade relationship with the right metrics…The narrative about this massive deficit is misplaced.”

US President Donald Trump has consistently pointed to Europe’s trade surplus in goods as an indication of the unfair trade balance between the two blocs, prompting the Trump administration to slap steel and aluminium tariffs on the EU. Ireland is among the countries with a large surplus in goods with the US. But Europe has argued that the picture is more balanced when it comes to trade in services. Mr Hogan pointed out that American services exports to the EU amounted to $256 billion in 2018.

He also criticised the US for labelling the EU as a security risk in order to justify the imposition of tariffs. “This narrative is hurtful to the EU people.”

Mr Hogan noted that the EU has been waiting since 2008 to receive approval for export of apples and pears to the US. “I would question the scientific basis” of blocking this approval, he said. He noted that the EU imported some $14 billion of American agriculture products, and granted the US 35,000 tonnes of the EU’s import quota for hormone-free beef

Nonetheless, Mr Hogan said the EU “is absolutely committed to a strong and positive bilateral agenda,” noting that the EU has already increased its imports of American soybeans, and liquefied natural gas.

“If we go about this in the right way, working together, the mutual benefits can be very significant. If we fail to do so the damage will be significant also.”

His comments come as the commissioner met several senior figures in the Trump administration and on Capitol Hill in his first visit to the United States as the EU’s trade commissioner. Mr Hogan met Treasury Secretary Steve Mnuchin, US Trade Rep Robert Lighthizer and Trump economic advisor Larry Kudlow.

Among those who attended a dinner hosted by the Irish and EU ambassadors on Tuesday at the Irish embassy were acting White House chief of staff Mick Mulvaney and several members of Congress including chairman of the Ways and Means committee, Richard Neal.

Mr Hogan, who is due to meet Mr Trump along with European Commission president Ursula Van der Leyden in Davos next week, is also scheduled to return to Washington early next week for further meetings.