‘Gilets jaunes’, empty-chairing of Zuckerberg and scientists on banknotes 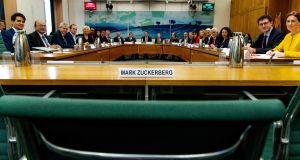 Image of the week: Where’s Mark?

While they neglected to follow the example of a campaigner outside who did the whole papier-maché head thing as he held up a “Where’s Mark?” sign, inside the Westminster committee room, politicians were asking the very same question. Facebook chief executive Mark Zuckerberg, in a surprise to no one, neglected to attend the “grand committee” hearing at the House of Commons, where members of parliament from Britain, Canada, Argentina, Brazil, Singapore, Latvia, France, Belgium and Ireland proceeded to empty-chair him. Pictured on the right are the Irish contingent of Hildegarde Naughton, who chairs the Oireachtas communications committee, and her committee colleague Eamon Ryan. The presumably well-paid Facebook executive sent to pass on his apologies was Richard Allan, global head of policy solutions, who will know his way round Westminster, being a former Liberal Democrat MP. Maybe next time, it will be former Lib Deb leader and new Facebook global policy and communications head Nick Clegg who gets to do the honours.

In numbers: Decline and fall

Decline in the UK economy’s gross domestic product over 15 years if it can’t manage an orderly exit from the European Union and the supply of workers from member states dries up, according to the British government’s own report.

Decline that would occur under the “Chequers” plan – already rejected by Brussels – with that fall worsening to 2.5 per cent if migration fell to zero. This impossible deal was deemed the best-case economic scenario for Britain. . . other than cancelling the whole Brexit project, of course.

Estimated hit per person from a no-deal Brexit, or about £200 billion all in. Project Impoverishment continues.

To France, where the “gilets jaunes” have been marching, protesting and blockading roads and petrol depots in Paris. Known as “gilets jaunes” (yellow vests) because of the high-visibility jackets they wear – in France, all motorists are required to carry one in their cars – the demonstrators participating in the grassroots’ revolt are reacting to an increase in fuel taxes, a particular source of financial pain for people outside urban areas who must drive to work. The higher taxes, which have coincided with rising fuel prices, are evidence of elitism at the heart of Emmanuel Macron’s government and the entire Macron project, they say. After tear gas on the Champs-Élysées last weekend following a clash between riot police and fringe groups, the French president reportedly lamented what these “war scenes” would do to France’s reputation, though he later acknowledged that his government “must listen to these protests of social alarm”. He’s not exactly promising a U-turn on fuel taxes though, merely a “review”.

Getting to know: Bob Sauerberg

Bob Sauerberg is the chief executive of struggling magazine empire Condé Nast, the publisher of Vogue, Vanity Fair and the New Yorker, but he’s destined for the exit after three years in the top job. The company behind Glamour (edited in the US by Irishwoman Samantha Barry, who has just announced an end to its print existence) has not been having such a stylish time of it lately. As a result, the US business is set to merge with its overseas subsidiary Condé Nast International, which will have a single chief executive, who won’t be Sauerberg. Last year, Condé Nast lost more than $120 million, put titles up for sale and slashed costs with what the media executive called “painful layoffs”, but while some of his digital experiments have brought in money, the fortunes of the traditionally well-resourced print magazine business in the US have not been at all glossy. If Vogue editor Anna Wintour chooses to head for the door, it truly will be the end of an era.

The Bank of England has drawn up a longlist of scientists – including Rosalind Franklin, Alan Turing, Stephen Hawking, Dorothy Hodgkin and one-time chemist Margaret Thatcher – to grace the next iteration of its £50 note. But which scientists have already had the honour of appearing on money?

1: Isaac Newton. The English physicist and mathematician discovered gravity. For his trouble, he got his face on a £1 sterling note for 10 years until 1988.

2: Albert Einstein. “Imagination is more important than knowledge,” said the physicist, which in retrospect reads like the conspiracy theorists’ charter. Anyway, German-born Einstein once graced an Israeli £5 note.

3: Mary Somerville. One of the first two women to be admitted to the Royal Astronomical Society, Somerville’s portrait can currently be found on Scottish-issued £10 notes.

4: Galileo Galilei. The astronomer and physicist once graced the Italian 2,000 lire note. Magnifico.

5: Marie Curie. Marie Sklodowska-Curie, the Polish physicist and chemist, has been commemorated on Polish banknotes on more than one occasion, while her adopted home of France once paid tribute to both Madame Curie and husband Pierre in similar fashion.

1 High Court appoints interim examiner to Compu b parent company
2 How much do Irish people earn? And what will Covid-19 do to our wages?
3 David McCullagh announced as co-host of RTÉ Six One News
4 Second Covid-19 outbreak and no-deal Brexit an appalling vista
5 System agreed for Irish goods to skip checks on UK trade
6 Ireland faces 'deep downturn' this year and may not rebound until 2024 if there is a second wave
7 Supreme Court in Dublin clears Bernie Madoff Ponzi loss case for hearing
8 Red tape logjam creates fear for Irish timber supply
9 Why are markets booming when a crash is on the way?
10 Datalex’s latest scary update offers glimmer of hope
Real news has value SUBSCRIBE