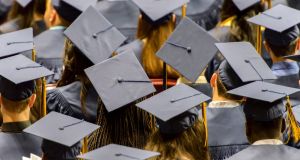 A quarter of the class of 2010 were living abroad five years after graduation.

Whenever the Irish economy has run into difficulties, emigration of young people has risen sharply. We’ve seen this happen in the 1950s, again in the late 1980s and between 2010 and 2014.

However, what has changed significantly over the last half century has been the education profile of those who have left.

Prior to the 1980s, the vast majority of those who left had very limited education. Lacking qualifications, many found it tough going abroad. By the late 1980s, four out of five emigrants had at least a leaving cert, and many had a degree.

In our most recent wave of mass emigration in 2010-2014, a majority of those leaving were graduates.

Over the next 40 years, we could experience a significant silver lining from the crash

In the 1980s concerns were raised about the leakage of talent, but many of those emigrating proved to be homing pigeons, returning as the economy picked up in the 1990s. In this recovery there has also been an increase in return flows of Irish from abroad, despite facing a challenging housing market.

A side effect of the economic crash has been a rise in education participation, particularly among young men. Prior to the crash in 2008, about one in five boys left school early, often to take a job in the then-booming building industry.

During the crash, without that ‘pull’ factor, the rate of early school leaving for boys was halved. This higher participation rate in education has held steady as the economy has recovered. Girls were already less likely to leave school early than boys, but they also saw improved participation rates following the crash.

The outcome is that Ireland’s rates of early school leaving are significantly better than for the EU15 as a whole.

Participation rates at third level also grew after 2008, and again the increase was most striking for men, rising from under 40 per cent completing college in 2007 to 50 per cent today.

Enhanced participation in education has multiple economic advantages, as well as clear benefits for the individuals and society. The higher someone’s educational attainment, the greater their chance of being in work, and the higher their productivity and lifetime earnings.

Over the next 40 years, we could experience a significant silver lining from the crash as the generation who chose to stay on in school have higher employment rates and earnings over their working lives.

This year the Central Statistics Office published a very interesting analysis of what happened to people who graduated in 2010 and in 2014. The study pooled administrative data from the third-level institutions, Revenue and social welfare, with careful protection to maintain the anonymity of those concerned.

The study documents gender patterns in the different subjects men and women study. The course taken plays a key role in determining where graduates subsequently work, with long-term implications for earnings.

The most popular courses overall – business administration and law – accounted for a similar share of male and female graduates. About one in 10 men or women had a science or maths degree.

Those who graduated in the depths of the crash faced a particularly difficult labour market. Even so, in 2011 two-thirds of those who had graduated a year earlier had a job, 14 per cent had emigrated and 10 per cent had continued in full-time education.

However, more than a quarter of this group were working in the retail and hospitality sectors a year after graduation. Although some graduates combined employment with further study, something that is easier to do while working in these sectors, many of these jobs did not require their hard-earned skills.

This factor may have influenced the subsequent rise in emigration for the class of 2010, a quarter of whom were living abroad five years after getting their degree.

The highest emigration rate (40 per cent) was for those with doctorates – although this may partly reflect the high share of foreign students involved. In terms of qualifications, emigration rates were highest for graduates in social science, engineering and construction.

While emigrants who have worked abroad, coming home with enhanced skills and experience, have helped transform the economy in the past, permanent emigration of those with key skills could be a serious loss to the economy. In particular, addressing the high emigration rate and low return rate of medical graduates should be made a priority.

1 Chris Johns: Boohoo exposed on pay and conditions in digital economy
2 Michael O’Leary is the boss you want to lead an airline out of crisis
3 In this strangest of recessions, what happens next for Ireland?
4 Hotel bookings collapse in wake of additional Covid restrictions
5 Estée Lauder staff at Dublin airport plan further strike action
6 Bank of Ireland sees about 2,000 staff apply for voluntary redundancy
7 Best Covid-19 ‘influencers’ will avoid hectoring
8 Ireland’s Covid-19 economy in five graphs
9 FBD changes wording of insurance policies as fight over virus payouts plays out
10 Coronavirus vaccine: 15 billion doses needed to inoculate the planet
Real news has value SUBSCRIBE