May has plans for ‘customs partnership’ to solve Border dilemma 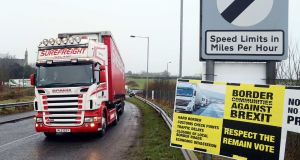 The UK prime minister Theresa May is stepping up plans to tackle the Irish Border question in Brexit talks through an audacious customs scheme once described as “magical thinking” in Brussels.

The scheme, which will be discussed with EU officials this month, would see the UK act as the external frontier for the EU, collecting tariffs and carrying out other checks on imports, but it could take many years to introduce.

A new UK ministerial group on Northern Ireland, including chancellor Philip Hammond, cabinet office minister David Lidington and Northern Ireland secretary Karen Bradley, has been set up to oversee planning for the Border.

The “customs partnership” plan is one of two customs options being proposed by Mrs May, but the only one that would remove the need for customs checks at the Border.However, Border checks would be required if Britain departed from EU regulatory standards.

The UK government has pledged to prevent a hard land border in Northern Ireland or a border in the Irish Sea after Brexit. But the technological challenges involved in the “customs partnerships” are challenging, and trade experts say the scheme would take years to introduce, suggesting that Britain and the EU would have to remain aligned on customs for some time after 2021, the end of the transition deal.

Britain is promoting the “customs partnership” plan as the best way to avoid disruption at the ports and the Irish Border since the UK would simply mirror the EU’s requirements for imports from the rest of the world.

At British ports the UK would apply EU duties on cars, food and other imports destined for the bloc’s market at the same rate as if the goods had arrived at an EU port, and then pass the money on to Brussels.

If the goods were staying in the UK, Britain would apply tariffs depending on its own free trade deals.

The plan rests on the development of tracking technology to identify the final destination for goods, and it is still widely regarded in Brussels as fanciful and probably unworkable.

However, British officials claim that in preliminary trade talks in Brussels last week the idea was no longer being written off as “magical thinking”, the term used by EU officials when it was originally mooted last year.

UK negotiators are also pinning their hopes on Brussels accepting the idea as a simple way of reducing new controls on the Irish Border, Dover and other ports. “The whole point would be to negate the need for new infrastructure,” said one official.

However, even if it were acceptable to Brussels, a new tracking system could be many years away. British officials privately say that customs and regulations would have to be closely aligned with the EU pending the introduction of new technology.

“It’s very unlikely that new border arrangements will be negotiated in detail, designed and completely implemented by January 2021,” said Joe Owen, senior researcher at the Institute for Government.

The second option being considered by Britain – a “streamlined” customs deal based on best practice from around the world – also relies heavily on technology, but would not completely eliminate the need for checks at the Irish Border.

Downing Street said that whatever customs deal was struck with Brussels, the British border would be secure on January 1st, 2021. “We’ll be ready, end of story,” said a spokesperson for Mrs May.

Anastassia Beliakova, head of trade policy at the British Chambers of Commerce, said it was “worrying” that no visible, practical preparation had yet taken place on the future customs relationship.

The apparent lack of urgency on the UK side has been contrasted with the Netherlands, where the authorities are hiring 750 new customs officers to deal with Brexit.

Some importers are sceptical about Mrs May’s current favoured option of a customs partnership using futuristic technology to track goods. “That option is really crazy, just not achievable, its sole purpose is to provide a political solution to the Irish issue,” said one business figure.

Jon Thompson, permanent secretary at British revenue and customs, said last autumn that setting up an entirely new system that would be “best in class”, like Singapore, would take five to seven years. – Copyright The Financial Times Limited 2018