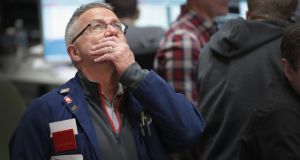 It was another wild ride for investors as the global stock markets at times looked like recovering before plummeting again. Investors struggled to cope with the volatility after years of relative calm. European market suffered under the fears of US volatility, yet by close the US markets had rebounded, with major indexes up more than 1 per cent. It’s not a time for the faint-hearted. Suzanne Lynch reports from the US while Mark Paul sums up the state of play in Ireland and Europe.

The tracker scandal continues to rumble on with Permanent TSB and KBC before the Oireachtas Finance Committee. PTSB were accused of holding up redress and compensation for thousands of customers affected by challenging a High Court ruling back in 2012. Meanwhile KBC admitted nearly 2,500 of its customers are still on the wrong tracker rate.

You can see why French sports giant Decathlon is planning to enter the Irish market, when you consider news that Life Style Sports broke the €100 million sales barrier for the first time. According to recently filed accounts the family-owned retailer also saw its profits soar by nearly 70 per cent.

Norwegian Air is to double the flights on its service from Dublin to New York. Since it launched, 130,000 passengers have flown on the firm’s Irish-US service. The additional flights will begin from April.

Staying in the air, Elon Musk, owner and chief executive of both electric car maker Tesla and space launch company Space X decided to bring both halves of his empire together to demonstrate the capabilities of the new Falcon Heavy rocket. It was something straight out of a science fiction script, complete with a David Bowie soundtrack.

The EU called Theresa May’s bluff on Brexit, writes Cliff Taylor in his column today. The end result was a rejection of the customs union, which puts the Irish Border back in the spotlight and seems to undermine commitments made last December.

Meanwhile Fiona Walsh traces the sorry tale of the takeover of the Homebase DIY chain by Australian counterpart Wesfarmers. There are lessons for every business person with ideas of expansion from this almost laughable catalogue of errors.