Chief executive says situation will be rectified within two months 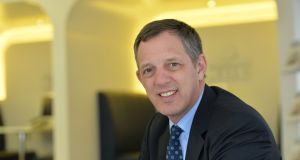 Nearly 2,500 KBC Bank Ireland customers are still on the wrong tracker mortgage rate several months after being identified by the bank as caught up in the industry-wide overcharging scandal.

Chief executive Wim Verbraeken said the bank had now identified just under 3,000 customers who were wrongly denied a low-cost tracker mortgage or had the incorrect interest rate applied to their accounts.

The updated figure, disclosed to the Oireachtas finance committee, is nearly double the number the bank admitted as recently as October.

Mr Verbraeken admitted 2,473 of these impacted customers had still not been put on the correct rate.

However, he said this situation would be rectified by the end of the month with redress and compensation offered to affected customers within the next six months.

In his address to the committee, Mr Verbraeken revealed that in 33 cases, customers ended up losing their properties as a result of overcharging by the bank, the highest number of any bank involved in the tracker controversy.

He also said that he expected this figure to rise in the coming months as the bank continued to review other cases.

Mr Verbraeken said the Belgian-owned bank planned to restore five of the six family homes to the customers in question on a reduced mortgage loan terms and on a tracker rate.

While the bank regretted what had happened and was deeply apologetic for the hurt caused, he said the bank’s own investigation into the matter had found no evidence of a deliberate attempt to target tracker holders.