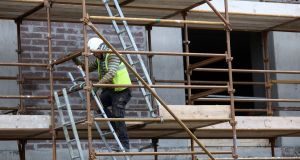 In the first quarter of 2018, 3,500 homes were completed, up 26 per cent on the same period last year. Photograph: Chris Ratcliffe/Bloomberg

The Government has overstated the number of new homes built in the State for several years by nearly 60 per cent, new figures have revealed.

The CSO’s “new dwelling completions” index, published for the first time on Thursday, said 53,578 homes were completed between 2011 and the end of 2017.

That compares with previous Government estimates – based on electricity connections – of 84,500.

The figures indicate that on average fewer than 10,000 new homes were built annually over the last seven years despite the ongoing housing crisis.

The one positive for the Government is that 2017 saw a significant pick-up in output with just under 14,500 new homes completed, up 46 per cent on the previous year.

That stronger performance has continued into the first quarter of 2018, when 3,500 homes were completed, up 26 per cent on the same period last year.

However, that is still far below the number required to meet estimated annual demand of between 30,000 and 35,000.

The department has up to now used ESB metering data as a proxy to count new homes, the logic being that developers will not bring a house to market until it is connected to the grid.

However, the overhang of so-called ghost estates from the boom has muddied the picture with many units built previously coming back into stock, effectively exaggerating the true level of supply.

Minister for Housing Eoghan Murphy said 3,000 ghost estates “queered the pitch” and claimed the CSO figures showed that “huge progress” was being made in building houses.

The CSO’s figures, which date back to 2011 and will be produced on a quarterly basis from now on, still utilise electricity connections data as their primary source. However, they also take into account stamp duty and Building Energy Ratings (BER) data, along with information from the latest population census and the GeoDirectory property database to get a more accurate picture of construction rates here.

Since 2013, housing completions have begun to rise again, but at a more moderate rate than previously thought.

The CSO’s Kevin Culhane said that, until now, there had been “no single, authoritative data source” on housing but the new figures were “the most comprehensive and accurate count of new dwelling completions currently available”.

“It’s not enough to catch up on the seven years during which almost no new homes were built but we are going in the right direction,” he said on a visit to Spain.

Mr Murphy said the number of new homes available for use was up 75 per cent since the end of 2015, taking into account new builds and ghost homes that were finished. “That doesn’t include 5,000 vacant homes brought back into use over that period. That’s incredible progress over that time. And that doesn’t include student bed spaces, of which there would be more than 2,000.”

Sinn Féin housing spokesman Eoin Ó Broin said the party was “actively considering” tabling a motion of no confidence in Mr Murphy by mid-July but was “keeping an open” mind on delaying until just before of after the October budget.

Dublin architect Mel Reynolds said it was a positive move to get the CSO to take charge of generating housebuilding output figures.

“Given that new build output has been previously overstated by up to 60 per cent, officials need to re-examine housing policy, demand projections and strategic plans and take lower activity into account,” he said.