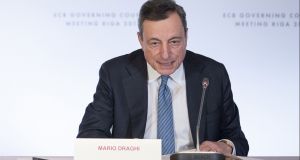 Mario Draghi, president of the European Central Bank, said rates will remain at zero for another year.

First the good news. The ECB has signalled that its key interest rate will remain at zero until after the summer of next year. So the regime of rock bottom interest rates which has benefited Irish borrowers is set to continue well into 2019, with many analysts saying interest rates will not rise until December 2019 or early 2020.

Those with tracker mortgages will continue to benefit from extraordinarily low rates, while borrowers on standard variable rates should not see any increase either. Competition for new borrowers will continue. The low interest rate party has another while to run.

How fast will interest rates rise when they start to increase? The ECB would hope – like the US Federal Reserve Board – to begin a regular programme of small rate increases. US base rates are now at between 1.75 and 2 per cent, after seven quarter point increases since their post-crash low.

How quickly euro zone rates will increase will depend on whether euro zone growth and inflation pick up, as the ECB continues to expect. Euro zone growth was an encouraging 2.3 per cent last year, but more recent indicators have been mixed. While headline inflation rose to 1.9 per cent in May, due to rising oil prices, core inflation excluding volatile energy costs remains much lower at 1.3 per cent. The ECB’s goal is for inflation to be close to 2 per cent but factoring out oil it is still a long way off this goal.

If growth and inflation do pick up, then the ECB will start moving interest rates away from current emergency levels sometime towards the back end of next year. But with threatened trade wars with the US and political uncertainty in Italy, there are dangers and uncertainties.

ECB president Mario Draghi said rates would remain where they were “ through the summer” of next year, using the type of imprecise language which central bankers like, as it give s them some flexibility. Still, this was a bit longer than many in the market had expected and suggests a delicate compromise in the ECB’sgoverning council between those, led by Germany, looking for an end to emergency measures and those who believe that the euro zone economy is not yet out of the woods.

As a nod to the monetary hawks, the ECB has given a clear indication that it will end the other part of its emergency medicine – its massive programme of buying bonds, mainly issued by government s – by the end of this year. It became clear after interest rates were cut to zero that this was not enough on its own to kick-start the moribund euro zone economy. So – like other big central banks - the ECB embarked on a massive programme of so-called quantitative easing, effectively pumping money into the euro zone economy by lending money to governments via purchases of their bonds.

It has bought some €2.4 trillion of bonds since the programme started in 2015. It will halve monthly purchases to €15 billion after September and plans to phase the programme out by the end of the year, provided economic indicators are moving as it expects.

1 Comcast acquires Irish cloud-based telco Blueface
2 Money matters: ‘My father embarrassed us with his haggling’
3 Pilita Clark: When a rude boss keeps you waiting, why not walk out?
4 Henderson Park seek €400m+ for prime Dublin office blocks
5 Five things to watch out for in Apple’s earnings
6 Opioid executive admits to ‘no morals’ ahead of prison term
7 Little strategic thinking in election manifestos of Fine Gael and Fianna Fáil
8 NI house builder apologises to Harry and Meghan over adverts
9 US threatens retaliation against EU over proposed carbon tax
10 Lack of trust blocks solutions to personal insolvency - ISI chief
Real news has value SUBSCRIBE