Makhlouf says NZ controversy could have been handled ‘more clearly’ 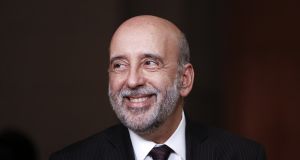 The incoming governor of the Central Bank has told Minister for Finance Paschal Donohoe that he could have handled a controversy involving him in New Zealand “more clearly and with a different emphasis”.

Gabriel Makhlouf, who will take up his new role in September, told Mr Donohoe he wanted to write to him “about the publication of the recent report into my actions following the breach of embargoed budget information in New Zealand”.

Mr Makhlouf has been chief executive and secretary of the New Zealand treasury since 2011. He was previously a senior civil servant in the UK, where he was a principal private secretary to Gordon Brown when the latter was chancellor of the exchequer.

However, the Government decision to appoint him to the Central Bank was caught up in a controversy involving Mr Makhlouf in New Zealand. It emerged he had claimed the accidental leak of sensitive budgetary material was a result of a hack, but a follow-up police inquiry found no evidence of one.

The issue was the subject of an independent investigation, and Mr Makhlouf referenced its findings in his July 15th letter to Mr Donohoe.

“The release of budget information two days before budget day was a serious matter and, as secretary of the treasury, I was ultimately responsible for maintaining the embargo,” he told Mr Donohoe.

“My immediate focus was to ensure that further material was not released, that the budget was delivered on schedule and that we learned the lessons from what had happened to avoid its repetition.”

He said his actions “over a period of just under 48 hours” were the subject of an investigation. Mr Makhlouf cited some of the investigation’s findings to Mr Donohoe: that he acted in good faith, and that his view “was sincerely held and honest and therefore meets the good faith test”; that he acted in a “politically neutral manner” and “went out of his way to ensure that he was not implicating the National Party in his media statements and interviews”.

The third finding cited by Mr Makhlouf was that his “actions and statements were reasonable in all respects other than in relation to his use of the phrase ‘deliberately and systemically hacked’”, as two other media comments he made at the time.

Mr Makhlouf told Mr Donohoe the investigation was “conducted thoroughly and fairly” and he accepted and agreed with its conclusions in full.

“In hindsight, I accept I could have described the incident more clearly and with a different emphasis. I was pleased that my honesty, integrity and political neutrality are not in question.

“I am a dedicated and committed public servant and am looking forward to starting my role as governor and having the honour of serving the Irish people, working with my team and the Central Bank.”

The European Central Bank also raised concerns privately, although an ECB spokesman stressed it was “not involved in the appointment procedures of national governors”.

It led Labour leader Brendan Howlin to call on the Government to re-examine the appointment, but a spokeswoman for Mr Donohoe Mr Makhlouf was chosen “following a competitive, international process and was, and is, deemed to be the most suitable candidate for the role”.

“Mr Makhlouf has been found by the independent State Services Commission to have acted at all times with honesty, integrity and in good faith, and was politically neutral throughout,” the spokeswoman added, in reference to the New Zealand controversy.