Industrial output dropped by 1.5% in June, a far steeper decline than anticipated 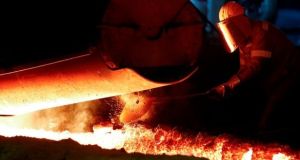 German steel worker at the ThyssenKrupp AG works in Duisburg

German industrial output fell more than expected in June driven by weaker production of intermediate and capital goods, in a further sign that Europe’s biggest economy contracted in the second quarter as exporters get caught in trade disputes.

Industrial output dropped by 1.5 per cent on the month - a far steeper decline than the 0.4 per cent fall forecast in a Reuters Poll of analysts, figures released by the Statistics Office showed on Wednesday.

“The continued plunge in production is scary,” Bankhaus Lampe economist Alexander Krueger said, adding that a recession in the manufacturing sector was likely to continue due to the escalating trade dispute between China and the United States.

Both countries are important export destinations for German manufacturers, which means that the tit-for-tat tariff dispute between the world’s two largest economies is having a disproportionately large impact on German goods producers.

“The longer this continues, the more likely it is that other sectors of the economy will be dragged into this. Growth forecasts for Germany are likely to be trimmed further,” Mr Krueger said.

In the second quarter as a whole, industrial output fell by 1.8 per cent on the quarter, driven by steep drops in metal production, machinery and automobile manufacturing, the economy ministry said.

“Industry remains in an economic downturn,” the ministry said. Production in construction fell 1.1 per cent in the second quarter while energy output dropped 5.9 per cent in the same period.

The figures came after German industrial orders on Tuesday exceeded expectations in June, but the economy ministry cautioned that the sector had not yet reached a turning point as a slowing world economy, international trade disputes and Brexit uncertainty are taking their toll.

Commerzbank economist Ralph Solveen said the industrial figures supported expectations that the German economy shrank slightly in the second quarter and that manufacturing output was likely to decline also in the coming months.

“A look at the individual sectors shows that the crisis in the automotive sector is continuing unabated,” Mr Solveen said, adding that car production had not recovered from the slump caused by problems associated with last year’s switch to a new emissions measurement standard.

“However, the main reason for this weakness is now likely to be significantly weaker foreign demand,” Mr Solveen said.

The German government expects the economy to grow by a meagre 0.5 per cent this year and rebound with a 1.5 per cent expansion in 2020.

Andreas Scheuerle from DekaBank said the industrial data suggested the economy contracted by 0.2 per cent in the second quarter after expanding by 0.4 per cent in the first three months of the year.