Planet Business: It was a forlorn week for the historic Harland and Wolff 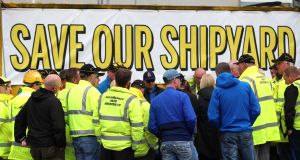 Image of the week: Save Our Shipyard

After the closure of shipyards in Newcastle, Glasgow and Liverpool, it is now the turn of Belfast, as the remaining 130 workers at Harland and Wolff received their last pay cheques and the historic yard wound up in administration.

The shipyard, which employed 35,000 people during its 1920s peak and dates back to the 1860s, built its last ocean liner in 1961 and had since moved on to upgrade work and other manufacturing, but it was unable to find a buyer after its previous owner, Norway’s Dolphin Drilling ASA, filed for bankruptcy last year.

Workers protested outside the gates of the shipyard in east Belfast, with some urging renationalisation – a call backed by the UK Labour party and Unite union – but Boris Johnson’s government has described its fate as “ultimately a commercial issue”. The famous Samson and Goliath cranes still stand proudly on the Belfast skyline.

£7 million Sum that the UK operation of Domino’s Pizza has spent stockpiling ingredients such as its Portugal-sourced tomato sauce in the event of a no-deal Brexit. Anyone for a Pizza Bianca?

105% The British food and drink industry’s warehouses will be this full come October 31st as a result of normal Christmas planning, one retailer told the BBC, meaning it would be “about the worst day you can pick” to just drop out of a trade bloc.

47% Chunk of food consumed in the UK that is imported. Its Food and Drink Federation warned this week that a no-deal Brexit would cause “serious disruption” that would result in “random shortages” for months, as it would depend which trucks got through and which didn’t.

Getting to know: Daniella Vitale

Named one of the 500 people who shape global fashion by Business of Fashion, Daniella Vitale has since 2017 been the chief executive of New York retailer Barneys, which filed this week for Chapter 11 bankruptcy protection, citing “excessively high” rents and thinning footfall to its luxury boutiques.

Before ascending to the top job, Vitale was responsible for reinvigorating Barneys’ e-commerce division, while she’s also worked for Salvatore Ferragamo, Giorgio Armani and Gucci. The mother of “thriving” twin teenage sons, she says the best decision she’s ever made was to stop worrying that her career would have a negative impact on her home life. Earlier this year, Barneys opened a “luxury cannabis lifestyle shop”, because it has always “been at the forefront of shifts in culture and lifestyle”, she explained at the time. Alas, the venture hasn’t staved off its current financial woes.

The Walt Disney Company is more than half-way through what is shaping up to be an unprecedented year at the box office, with several titles from its empire raking in more than $1 billion each. So what did its latest quarterly update have to say?

1. Records tumbling Chief executive Bob Iger congratulated his own movies division for racking up more than $8 billion in revenues so far this year – an industry record.

2. Strategic transformation Disney is now the owner of one-time Murdoch company 21st Century Fox, which it is now “integrating”.

3. Streaming move Disney will be bundling its imminent streamer service Disney+ with Hulu and ESPN+, which it also owns, at the Netflix-baiting price of $12.99.

4. Disneyland Paris Higher ticket prices offset lower attendance at this particular theme park – Disney knows how to charge when it decides it wants to charge.

5. Marvel magnet Avengers: Endgame is currently Disney’s box office leader for the year. Indeed, last month it edged out Avatar to become the highest-grossing film of all time.