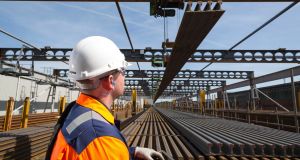 Number of males signing on fell by 1,500 in May while females decreased by 700. Photograph: Steve Morgan/PA

The number of people signing on the Live Register has fallen again, with an additional 2,200 coming off the register in May.

The number of people on the Live Register is now at its lowest number since October 2008, the Central Statistics Office said.

The Live Register is not a measure of unemployment, as people with part-time work can be entitled to benefits.

The CSO’s monthly unemployment statistics put the State’s headline rate at 6.4 per cent in May.

“Today’s CSO figures for the month of May show that large numbers of people are leaving the Live Register, with a 14 per cent reduction in the Live Register in 12 months, a fall of 44,120 people,” Minister for Social Protection Leo Varadkar said.

“This fall in the Live Register is reflected in the number of people finding jobs in our growing economy,” he said, noting that the CSO’s recent quarterly national household survey showed that full-time employment rose 84,200 in the 12 months to March.

“My department’s own figures show that in April, 12,300 spells on the Live Register ended with a person finding a job,” Mr Varadkar said.

“I want to commend the thousands of personal stories that resulted in these people entering or returning to the workforce. Each case is obviously unique, but there are many common themes,” he said.

“ They include older employees who have learned a new skill, people who set up their own business, with or without State support, and lone parents who have overcome numerous difficulties,” he added.

1 BOI customers to be charged twice with bank fees on New Year’s Eve
2 How to gift your child a house deposit . . . tax free
3 Irish designer of Oxford vaccine: ‘I’ve never worked so hard in my life’
4 Son putting elderly dad under pressure to sign over land
5 We continue to ignore massive pensions elephant in the room
6 Workers have little idea of the cost of retirement income
7 Boeing seeks dismissal of Norwegian Air’s €1bn lawsuit over Max aircraft
8 Must I pay tax on sale of inherited apartment in Baltics?
9 EU transport companies fear chaos through Britain on January 1st
10 Stocktake: Another incredible week for Tesla
Real news has value SUBSCRIBE