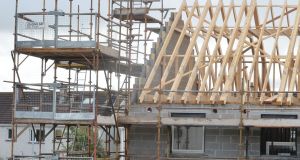 The State’s housing crisis is having an adverse effect on the entire economy, pushing up wages, threatening inward investment and limiting firms from expanding, the National Competitiveness Council has warned.

In its latest Cost of Doing Business in Ireland report, the watchdog said there was a strong link between rising house prices and rents and wage expectations.

As a result, developments in the residential property sector have a direct impact on Ireland’s international competitiveness, the council said.

“The shortage of housing in Ireland remains an impediment both to attracting mobile inward investment and the expansion of operations by enterprises,” it said.

The council said that despite an increase in construction activity and planning permissions, residential property supply remains constrained, meaning property price inflation was likely to continue in the short term.

“In a distinct echo of the recent past, our housing market risks undermining our entire competitiveness offering,” the council said.

The competitiveness watchdog warned that office rents, particularly in Dublin, were also rising sharply due to limited supply posing a significant threat to sustained cost-competitiveness.

It said annual growth rates in office rents in the five years to the second quarter of 2016 in Dublin 4 and Dublin 6 were 14.1 per cent, significantly higher than comparable rates in the UK and the euro area.

The council’s report also highlighted the cost of credit in Ireland as a significant downside risk to competitiveness, noting Irish interest rates on business loans have been consistently higher than equivalent euro-zone rates.

It said Brexit had “far-reaching consequences” for the Irish economy and brought into sharp focus the need for Ireland to maintain and improve its cost-competitiveness.

In its report, the council also highlighted the relatively higher costs associated with a range of business activities in Ireland, including legal services, which it said was out of kilter with other countries.

Peter Clinch, chairman of the National Competitiveness Council, said: “While Ireland’s recent improvement in standing in global competitiveness rankings is very welcome, the appreciation of the euro vis-a-vis sterling and increases in oil prices in the last year highlight how vulnerable Irish firms are to cost shocks.”

“To remain competitive there is a role for both the public and private sectors alike to manage proactively the controllable portion of their respective cost bases, drive productivity and continue to take action to address costs,” he said.

“Such actions will ensure that improvements in relative cost-competitiveness are more sustainable, leaving Ireland better-positioned to cope with external shocks,” he said.