Nationwide index suggests prices fell by 0.2 per cent month-on-month in May 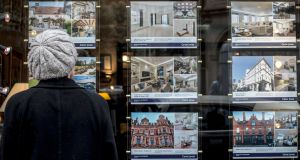 House prices in London are predicted to fall in real terms across 2017 – marking the first time this has happened since 2011 – according to an index. Photograph: Lauren Hurley/PA Wire

British house prices fell for a third consecutive month in May for the first time since 2009, according to a survey on Thursday that underlines the housing market’s slowdown since last year’s Brexit vote.

House prices fell 0.2 per cent month-on-month in May, compared with a 0.4 per cent drop in April, mortgage lender Nationwide said. A Reuters poll of economists pointed to a drop of 0.1 per cent.

Year-on-year, house prices were 2.1 per cent higher, slowing sharply from growth of 2.6 per cent in April. “It is still early days, but this provides further evidence that the housing market is losing momentum,” said Robert Gardner, Nationwide chief economist.

“Moreover, this may be indicative of a wider slowdown in the household sector, though data continues to send mixed signals in this regard.” Reuters