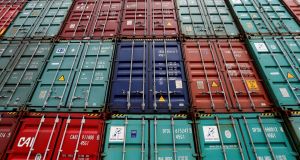 The 5.2 per cent increase in GDP for last year was at least more plausible than the previous 26 per cent figure. Photograph: Carlo Allegri/Reuters

Another year, another bumper level of economic growth. But how much stock can we really put in these headline numbers, given the level of statistical noise being generated by multinationals?

That said, the 5.2 per cent increase in gross domestic product (GDP) for last year was at least more plausible than the previous 26 per cent figure, the one that generated the “leprechaun economics” tag.

However, even this more modest rate probably inflates the true level of economic activity here, and CSO statisticians suggest the 3 per cent rise in consumer spending is a better measure of the economy’s velocity.

It certainly tallies better with the growth in employment last year (3.3 per cent) and the increase in the Government’s tax revenue (5 per cent).

Extrapolating growth rates from the national accounts has become a complex business for all countries that host multinationals, but particularly for small, open economies such as Ireland’s.

Globalisation has created a new world order of corporate giants such as Apple and Google whose incomes are more on a par with small and medium-sized countries and whose complex business structures are hard to pin down.

The CSO was criticised last year for its revision to GDP but it could do little to avoid the problem.

A recurring theme has been the import of intellectual property assets by multinationals in the face of a global clampdown on corporate tax avoidance.

Part of this process involves transferring intangible assets such as patents to Ireland from other tax jurisdictions in the interests of transparency.

The trend prompted a 45 per cent jump in investment to €76 billion in 2016, albeit the CSO said the additions to Ireland’s capital stock were offset by “corresponding imports of these products”.

Another distortion relates to the profits associated with redomiciled plcs or so-called brassplate entities, which generate little in the way of real economic activity and are only based here for tax purposes.

The latter explains the 9 per cent jump in gross national product (GNP), which used to be the indicator we relied on for a more accurate reading of domestic activity.

The CSO is endeavouring to weed out these distortions by using a modified gross national income (GNI) indicator, which will be updated later this year.