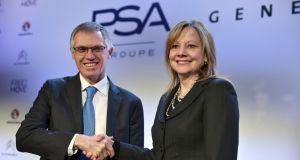 Image of the week: Fast getaway

Beams all round in Paris this week as General Motors chief executive Mary Barra shook hands with PSA chief executive Carlos Tavares, having successfully offloaded GM’s loss-making European car business, including Germany’s Opel and British brand Vauxhall, to the French maker of Peugeot and Citroën. GM, having finally had enough of driving on the left, has now fully reversed out of Europe as it searches for new routes to profit in China. PSA, meanwhile, wants to become “a real European champion” – having overtaken Renault, it trails only Volkswagen in market share. The race is now on to make as much cash as possible from human-driven cars before slipping into the industry lane marked “self-driving”.

Sobo is the buzziest, most vibrant and most “artisan” area of Dublin, yeah? It’s “the connective hub linking Grand Canal Dock with the city centre and IFSC,” according to, well, Sobo.ie, copyright of the Hibernia Real Estate Investment Trust.

“Located at the pulse of the new city on the south banks of the river Liffey, Sobo (South of Beckett O’Casey) is on the cusp of an exciting revival,” says Hibernia: “Leading businesses are settling here, drawn by the area’s connectivity, character and contemporary edge.” So it’s a revival, no less. Sobo, “a place with a history of connecting people”, is now destined to unite people all over again – in opposition to its name.

Getting to know: Kasper Rorsted

Kasper Rorsted is the man on the mission to give German sportswear brand Adidas, of three stripes fame, a fresh burst of energy. The former boss of consumer goods firm Henkel has jumped into the sticky business of fending off competition from US rivals Nike and Under Armour. Indeed, he says he’s “ready to fight” them and has increased Adidas’s sales and profits targets as a result.

In the job since October, Rorsted this week oversaw the announcement of a fourth-quarter net loss of €10 million, despite a 12.5 per cent rise in revenues, so it might take a few laps of the quarterly reporting cycle before he can restore the brand to glory and make Adidas cool again.

First day opening price for Snapchat parent company Snap, up 44 per cent on its initial public offer price of $17 a share. It closed that first day at $24.48, but has sunk this week.

Price per share that analysts at Pivotal Research Group reckon Snap’s shares are worth. Other analysts have dubbed it a “lottery-like stock” – you might win, but you probably won’t.