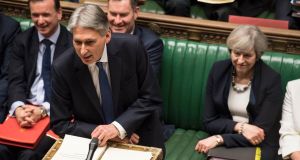 Philip Hammond making his budget statement to the Commons. “My budget offers a further boost in ensuring that people across Northern Ireland can share the benefits of economic growth across the country.” Photograph: UK Parliament/Mark Duffy

The Stormont Executive has been offered a £120 million (€138m) carrot by UK chancellor Philip Hammond, who said the money would become available when a new Northern administration got up and running.

The measure was contained within Mr Hammond’s first UK spring budget as chancellor. He also introduced measures that would see thousands of self-employed people in the North face a tax rise next year.

Mr Hammond said the UK government wanted the next Executive to make setting a budget for 2017-18 “one of its early priorities”, and he has given it leave to “incorporate the new funding” into its planning when it does so.

“My budget offers a further boost in ensuring that people across Northern Ireland can share the benefits of economic growth across the country.”

However, the director of the Royal Institution of Chartered Surveyors in the North, Ben Collins, said it was essential that the money “is spent in a way that will provide the best outcome for the Northern Ireland economy”.

“Upgrading Northern Ireland’s aging and historically underfunded infrastructure will provide an economic boost in the short-term, and enhance Northern Ireland’s competitiveness as we seek to attract additional foreign direct investment.”

Ann McGregor, chief executive of the NI Chamber, said without an Executive funding could not be allocated, and the North would lack the stability “required to help the economy grow”.

Meanwhile, Mr Hammond’s budget will directly hit the pockets of an estimated 125,000 self-employed workers, including those who effectively run their own small business as construction workers.

Changes to the previous £5,000 tax-free annual dividend allowance – which will be cut to £2,000 yearly – will hurt company directors.

Angela McGowan, Northern Ireland director of the Confederation of British Industry, said she believed there was evidence that uncertainty surrounding Brexit was “dampening business investment” and there was very little in the budget that would give relief to the North’s business community.