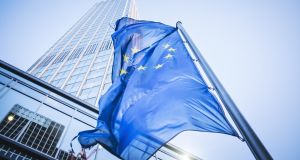 The ECB raised its inflation forecast for this year to 1.7 per cent from 1.3 per cent. Photograph: Getty Images/iStockphoto 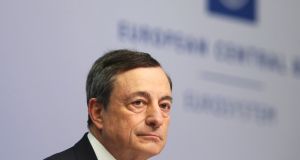 Mario Draghi, president of the European Central Bank (ECB), looks on during a news conference to announce the bank’s interest rate decision at the ECB headquarters in Frankfurt

Mario Draghi defended the need to keep European Central Bank stimulus on Thursday, saying that underlying inflation pressures remain subdued even as he acknowledged that the cyclical recovery may be gaining momentum.

“The risks surrounding euro-area economic outlook have become less pronounced but remain tilted to the downside, and relate predominantly to global factors,” the ECB president told reporters in Frankfurt after the Governing Council repeated its intention to keep its bond-buying programme in place until at least the end of the year.

“The Governing Council will continue to look through changes in inflation if judged to have no implication for medium-term outlook for price stability.” Exactly two years after the ECB started buying euro-area government bonds, inflation has accelerated above its goal of just under 2 per cent, spurring calls to reduce stimulus.

Mr Draghi has sought to defuse the pressure by pointing out that price acceleration is largely driven by energy costs, and that political risks including national elections have the potential to knock the recovery off course.

He also unveiled fresh inflation forecasts, that support the case to press on with stimulus as planned. While the projection for this year was raised to 1.7 per cent from 1.3 per cent seen in December, price growth will then stay at about those levels for the following two years.

Mr Draghi also reiterated that the ECB is ready to lower interest rates if needed, though he said the Governing Council had a “cursory” discussion over whether to remove that pledge.

He noted that he deliberately dropped a phrase used in previous opening statements that the ECB would use “all instruments” within its mandate if necessary.

“That’s been removed to signal that there is no longer that sense of urgency in taking further actions,” he said.

“The urgency prompted by deflation risks isn’t there,” he said, adding that “our monetary policy has been successful.”