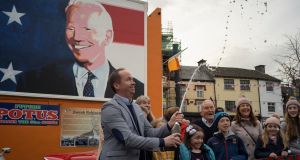 As America turned slowly blue, Ballina held its breath. Was it really possible that Joe Biden, considered a native son of this Co Mayo town , albeit five generations removed, was about to become the next American president? It was.

On Saturday, the election was called for Biden, and Ballina was ready to celebrate. The first Champagne cork was popped by Biden’s distant cousins in the town’s Market Square, watched by a few hundred delighted townspeople, two hours before CNN made the call.

Someone drove up in a cherry red ‘57 Buick Electra coupe with Elvis cushions in the back window. A speaker played Biden’s campaign song, Bruce Springsteen’s “We Take Care of Our Own,” and the walk-on music from former President Bill Clinton’s winning campaign, “Don’t Stop (Thinking about Tomorrow).”

Pride in Biden is strong in this town. His great-great-great grandfather Edward Blewitt was born in Ballina and emigrated to Scranton, Pennsylvania, just after the famine, according to historians.

Now, the town can boast that it has produced not one but two presidents. former Irish president Mary Robinson, was born a few hundred yards from Market Square, in a house by the salmon-rich River Moy. She won election on November 7th, 1990 – exactly 30 years before Biden’s victory.

“It’s amazing to think of it,” said Aileen Horkin, an elementary schoolteacher in town. “I can tell any child in my school that they can grow up to be a president.”

On Friday evening, glued to CNN and RTE, not even these doom-laden fans of Mayo’s heartbreaking football team could see a way for their boy to snatch defeat from the jaws of victory. They would have to prepare a party for when the election was called. But where, and with Ireland under a strict coronavirus lockdown, how?

The first question was easily answered. As the sun set on Friday, a beautiful, crisp late-autumn day, the Ballina Community Clean Up group began to assemble under the town’s newest piece of street art, a giant, oddly Warhol-like Biden billboard that beams down on the Market Square. It was erected two months ago in what seem to have been guerrilla circumstances.

“We had it up before the county council knew,” confided Linda O’Hora, a member of the group who helped to paint and assemble the tribute in a local warehouse.

“Anything over 25 meters square would need planning permission from the council,” said David O’Malley, a local lawyer and informal legal adviser to the group. “That painting is 24.98.” Anyway, he said, the image was on a private wall. Next, the planners had to decide how to decorate.

A lone string of stars-and-stripes bunting was located, and run across to a neighboring building. More would have to be found. Horkin, wearing a Biden-Harris 2020 T-shirt, had brought some old Christmas decorations and was trying to work out how to repurpose them.

“You can’t buy anything now because of the Covid lockdown,” she said. “All the stores are shut.” Scouts were dispatched to track down the owners of the local joke shop and the theatrical costume store, which were rumored to have stockpiles of bunting and US.-themed paraphernalia, as well as lots of unsold Donald Trump Halloween masks. Horkin recalled that two children from her school had come in at Halloween dressed as the presidential rivals. “We should get them to do it again,” she suggested.

By the next morning, the streets of Ballina had sprouted American and Irish flags, while print shops were busy turning out posters of Biden in county colors, with the legend “Go Mayo, Joe.” A steady stream of parents led their children up to the wall, to have their picture taken under the president-elect.

Gerry Luskin, a local restaurateur and president of Ballina Chamber of Commerce, said there were long-standing links between Ballina and Biden’s hometown of Scranton. Many people from Mayo emigrated to Scranton, and Ballina and Scranton are sister cities.

“There are a lot of ordinary people in Ballina who also have relations in Scranton,” he said. “When his great-great-great grandfather went to Scranton, a lot of other people followed, and they worked in the railroad and the coal mining and things like that.”

Biden’s ancestor was a government official and a surveyor, and he was deeply involved in famine relief, according to historians. “When we saw Lackawanna County turn blue on CNN, we said that’s all the Ballina people who went there,” Horkin said of the county containing Scranton. Biden won more than 53 per cent of the votes in Lackawanna County, and his victory in Pennsylvania propelled him to clinch the presidency.

Luskin recalled being a junior chef at nearby Ashford Castle when Ronald Reagan stayed there during his own presidential pilgrimage to the ancestral soil in 1984. But he said he thought Reagan, like several other presidential visitors to Ireland, mainly had an eye on shoring up his Irish American vote.

Biden, he said, has real and affectionate links to Ballina. Apart from an official visit in 2016, when Biden was vice president, he has made several other informal trips to the town. In 2017, he broke ground on the building of the region’s new hospice, of which he is a patron.

Joe Blewitt, a 41-year-old plumber and Biden’s third cousin, has met him several times in Ballina. Blewitt was a guest at the tearful White House ceremony where President Barack Obama surprised Biden, then his vice president, with the Presidential Medal of Freedom for his service to the country.

He arrived at the square in Ballina in a van that bore the legend “Joe Biden for the White House and Joe Blewitt for Your House.”

“He’s a lovely man,” said Blewitt as his daughters Emily, 9, and Lauren, 7, smiled and shivered in the cold. “A really nice man. He knows how to handle himself.” “He’s real presidential material,” he added. “When he came back in 2017 to turn the sod for the hospice, we had lunch with him and his brother, and he’d no security this time, and we just talked about all sorts. He could be all day talking and telling stories. He has a few good ones. He’s a long time at it.”

Are there many other Blewitts left in Mayo? “Too many,” joked a voice in the background. Derek Leonard, owner of Harrison’s pub, bemoaned that any celebrations would take place under a lockdown.

But, like many other business-owners in the town, he hoped this would be more than made up for by future trade from visitors exploring the roots of an American president. It is believed that the house in which Biden’s great-great-great grandfather was born and raised, now gone, stood in a disused lane behind Harrison’s pub, Leonard said. “It’s full of rubble right now, but I’ll clear that out,” he said. “And we’ll put up a plaque, even if I have to do it myself.” –New York Times