Knock knock, who’s there? The Nobel prize for economics

US academic Paul Milgrom first learned off his Nobel Prize win after his neighbour and Stanford University colleague Bob Wilson pressed his doorbell at 2am to inform him the duo had won the prize for economics. Video: Reuters 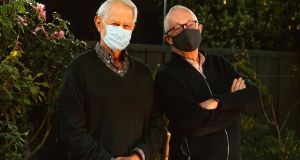 Robert Wilson and Paul Milgrom, both professors at Stanford, won the Nobel Prize in Economics for improving how auctions work. That research that underlies much of today’s economy, from the way Google sells advertising to the way telecoms companies acquire airwaves from government. Photograph: Andrew Brodhead/Stanford News Service via AP

When the Royal Swedish Academy of Sciences announced on Monday that the American economists Paul Milgrom and Bob Wilson had won the Nobel prize for economics, both men were fast asleep in their beds in Stanford, California.

Eventually the committee managed to get hold of Wilson to tell him the news. But Milgrom was asleep and nobody could contact him. So it was up to Wilson – who happens to be Milgrom’s neighbour – to go to the home of his former student in his pyjamas to relate the happy tidings, that he had won the prize worth $1 million (€848,142).

Footage from Milgrom’s security camera captured the moment that Wilson arrived in the dead of night to break the news. In the recording, Wilson and his wife, Mary, walk up to the door, Mary clutching her phone.

“Paul, it’s Bob Wilson. You’ve won the Nobel prize,” he says, with economy and restraint. “And so they’re trying to reach you. But they cannot. They don’t seem to have a number for you.”

Mary jumps in: “We gave them your cellphone number.”

“Will you answer your phone?” says Mary, and laughs.

A few minutes earlier, according to Stanford University, Wilson “had been caught off-guard by the news” too. When his home phone rang in the early hours he unplugged it. So the Nobel committee called Mary instead.

Later Milgrom explained how things unfolded from his perspective.

“I was asleep and the doorbell rang at two in the morning. And then I picked up the phone – it’s a video doorbell. And I saw Bob’s face and he was knocking at the door, telling me that they were trying to call me and that we had won a Nobel prize, which is pretty, pretty good news,’ he told Reuters.

The Stanford academics won the Nobel for economics for their work on auction theory and improving auction formats. Milgrom was Wilson’s graduate student in the 1970s and the pair have worked together since.

Stanford explained the research as underlying “much of today’s economy – from the way Google sells advertising to the way telecoms companies acquire airwaves from the government”.

In a statement on the win, the Royal Swedish Academy of Sciences wrote: “They have also used their insights to design new auction formats for goods and services that are difficult to sell in a traditional way, such as radio frequencies … Their discoveries have benefited sellers, buyers and taxpayers around the world.”

Milgrom is the third of Wilson’s students to win a Nobel. - Guardian Service

1 ‘They’re not making any more land, so it will be valuable’
2 Basic income for all: Has the Covid crisis given us a new economic model?
3 Chris Johns: Economies may enjoy ‘roaring twenties’ if ministers learn lessons
4 How long can Government afford to keep State pension age at 66?
5 Wet pub openings fuelled rise in Irish Covid infection rates – report
6 RTÉ challenges producers to come up with Saturday night quiz show
7 Covid-19 weighs on law firms as two in three report drop in revenue
8 ‘I don’t need to do any of this. . .I don’t actually need to work.’
9 Irish early-stage start-ups suffering funding crisis
10 Direct sea routes to Europe offer certainty in choppy Brexit waters
Real news has value SUBSCRIBE