Kainos expands to Canada as revenue grows to nearly €68m 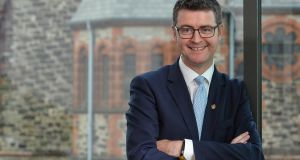 Kainos, the Belfast-listed technology company, is to expand its operations to Toronto “in the next few weeks” following an “exceptionally strong performance” in the first half of the year.

The company, which employs more than 1,300 people across 11 offices in Europe and the US, has recently established a presence in Frankfurt and Copenhagen.

The results highlight the strength of its financial position, with £38.8 million of cash, no debt and net assets totalling £45.8 million in the six months to September 30th.

According to chief executive Brendan Mooney, the company is “well on the way to achieving a ninth consecutive year of growth – in terms of our people, customers, revenue and adjusted pre-tax profit”.

“The group’s pipeline of prospects continues to strengthen across all divisions and the board believes that the group is well positioned for growth both in the short term and in the coming years,” Mr Mooney added.

Although Kainos has acknowledged that “Brexit continues to generate uncertainty within the wider UK economy”, it believes there “is no negative impact to the programmes with which Kainos is involved” and is confident that it is well positioned to play a key role in the “future digitisation” of the UK public sector.

Kainos says its future success is “dependent” on the capability of its workforce. It has so far distributed 1.8 million free shares to staff and, up to July 2018, has awarded a further 2.3 million options to staff.

Kainos has said it will pay an interim dividend of 2.8 pence per share for the six months to end-September on December 28th.