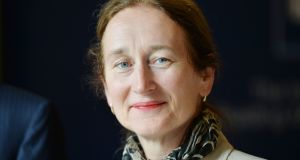 Mr Walsh’s term as chairman of the National Treasury Management Agency (NTMA), which manages the Republic’s finances, is due to end on December 31st.

Minister for Finance Paschal Donohoe announced on Tuesday that Ms Carton will take over as chairwoman of the agency from January 1st.

Ms Carton is a former executive and board member of Irish building materials giant CRH, where she was group finance director and group transformation director.

She has been a director of the NTMA since the Government appointed the agency’s first board in 2014 under legislation that strengthened the body’s corporate governance.

Mr Donohoe said: “Maeve Carton brings outstanding international financial and corporate governance expertise to the role of chairperson of the NTMA and I wish her well in the role.”

The Minister thanked Mr Walsh for his “exceptional” contribution, saying that he oversaw far-reaching changes in the agency’s corporate governance, which positioned it to fulfil several complex roles for the State.

The NTMA borrows cash for the State from global finance institutions. It is also responsible for State assets agency, Nama, which took over the banks’ property loans following the financial crash, and the State Claims Agency, which manages compensation claims against the Government and its bodies.

Mr Donohoe said that he would appoint the rest of the agency’s board through the Public Appointments Service.