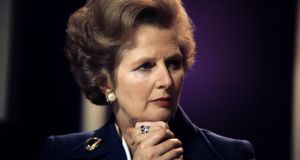 Margaret Thatcher, the former British prime minister who died five years ago. In the 1940s, the then Margaret Hilda Roberts gained a degree in chemistry from Oxford University. Photograph: PA Wire

Margaret Thatcher was a deeply divisive figure during her lifetime and remains so five years after her death.

News this week that Britain’s first female prime minister has made it on to the list of candidates to feature on the new £50 note has caused quite a stir – and the division is not just along party political lines.

The new polymer £50 note will feature a scientist and the Bank of England has ruled that Thatcher is eligible for consideration. Whether you’re a fan of Thatcherism or not, science is not the first thing that tends to pop into your head when you hear her name. So what exactly is the late politician’s contribution in the field?

While it’s well documented that the then Margaret Hilda Roberts gained a degree in chemistry from Oxford University in the 1940s, it all gets a bit murky after that.

She spent a brief time before entering politics working as a research chemist for J Lyons & Co, the food manufacturing, teashops and restaurants group, in 1949. She was part of a team developing emulsifiers for ice cream, but quite what part she played is now lost in the mists of time.

Over the decades, however, and particularly since her death, a myth has developed that Britain’s first female prime minister was responsible for creating soft-scoop ice cream, along with a method to make the dessert lighter and fluffier by the injection of air.

Or, as the Sun described the late prime minister’s role yesterday, “helping to create Mr Whippy”.

The myth endures, despite the fact that it’s been pretty comprehensively debunked over the years, not least because soft-scoop ice cream had already been invented in the US round about the time the future prime minister would have been at school.

Still, it got trotted out again as her name appeared on Monday’s list of candidates for the new banknote, which will replace the current paper note featuring the 18th-century steam engine specialists Matthew Boulton and James Watt.

The new banknote will “celebrate the UK’s contribution to science”. Members of the public were invited in early November to put forward names of scientists they felt worthy of the honour.

It’s clearly captured the public imagination, as the Bank of England has so far received more than 174,000 suggestions. Of these, some 800 have been ruled eligible for consideration, including Baroness Thatcher.

As the queen is the only living person whose image appears on UK banknotes, candidates must be deceased.

There was initially some doubt as to whether one of the front-runners, Stephen Hawking, who died in March, could be included, as the bank has an informal rule that historical figures featured must have been dead for at least 20 years. Governor Mark Carney has made it clear, however, that Hawking, a towering figure in the world of science, is firmly in the running.

The bank has featured characters on the back of its banknotes since Shakespeare appeared on the £20 note in 1970. It has been criticised for the lack of women – the queen aside – appearing on the notes and a female figure would be a popular choice.

Along with Hawking, candidates with a far better chance of being chosen than Thatcher include Ada Lovelace, the 19th-century mathematician known as “the grandmother of computing”.

Lovelace was name-checked by chancellor Philip Hammond in his recent budget, as he outlined his vision of a Britain capable of leading the world in scientific and technological advances, as it did during the industrial revolution, which may or may not be a sign.

Another highly-qualified female candidate would be Rosalind Franklin, who played a vital role in decoding the structure of DNA. And Dorothy Hodgkin, as the only British woman to win a Nobel prize for chemistry, must also be in with an excellent chance.

Their names are among the 800 on the bank’s long list, along with other, less well-known figures, such as John (Iron Mad) Wilkinson, an 18th-century industrialist who pioneered the use of cast iron, and James “Paraffin” Young, a 19th-century Scottish chemist whose area of expertise is apparent from his nickname.

Members of the public can continue to put forward their favoured candidates via the Bank of England website until mid-December. The names will then be whittled down to a shortlist by the bank’s “character advisory committee” and presented to Carney, who will make the final choice.