Flat rate expenses: How scheme works, how much it’s worth – and who really benefits most 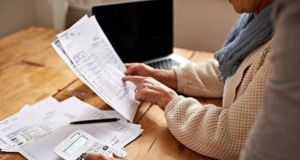 The expense regime is available to those working in a broad range of professions and trades, from teachers to bricklayers to hospital doctors. And figures show that more than 536,000 taxpayers claimed the relief in 2018, across 53 employment categories. File photograph: Getty Images

Earlier this week it emerged that Revenue is reviewing the regime of flat-rate expenses. This has existed for many years but is now only coming under the spotlight. Already, Revenue has consigned tax reliefs enjoyed by some trades and professions – including journalists – to the scrap heap, and it is considering what it should do with a host of others.

The move was greeted with dismay with taxpayers worried that any gains in the recent budget will be wiped out by the elimination of such reliefs.

But before jumping on the bandwagon to condemn the move, might it be judicious to consider first how these flat-rate expenses work, how much they’re actually worth and who they really benefit the most?

On Tuesday, I received two incorrect comments on how they work – one from a tax adviser and the other from a TD – so it’s not unreasonable to suggest that many more people might be just as confused.

Flat-rate expenses were introduced to cover the cost of certain expenses employees incur in the course of their profession or trade. These include, for instance, the cost of a builder acquiring tools, teachers getting equipment for a classroom, or a nurse laundering her uniform. In essence, these were work-related expenses for which PAYE employees would not otherwise be reimbursed.

The expense regime is available to those working in a broad range of professions and trades, from teachers to bricklayers to hospital doctors. And figures show that more than 536,000 taxpayers claimed the relief in 2018, across 53 employment categories.

For employees, it’s an attractive regime because it doesn’t require them to keep receipts or make a claim themselves with Revenue. Moreover, at first glance, the relief can be sizeable.

Professional musicians, for example, are entitled to annual relief of €2,476, while hospital consultants are eligible to claim relief of €695 a year.

This is why, perhaps, there has been such opprobrium to the news that Revenue has decided to withdraw reliefs affecting more than 85,000 people from January 1st, 2019.

Speaking in the Dáil last week, Minister for Finance Paschal Donohoe said that, given changes in “employment circumstances, regulations and work practices across employments”, Revenue decided to embark on a review of the regime earlier this year.

The outcome of this to date has been the withdrawal of the relief from a number of job types, while Revenue is set to continue its review into 2019. This may result in the flat-rate amount for other employments being either increased or decreased or even withdrawn “where the continuation is no longer justified”.

Do they really benefit low-income workers?

Since it emerged that the expense regime was being overhauled, the focus has been on how low-income workers will be hit. Fianna Fáil spokesman on finance Michael McGrath and Sinn Féin finance spokesman Pearse Doherty have both argued that the move is going to hit the least well-off the most.

But is it true? We need first to understand how the expense regime works. As reported in the Dáil, the gross value of the expense regime applied to shop assistants was €9.1 million in 2018, with relief of €121 available per worker.

This does not, however, mean that each of the 75,822 shopkeepers who claimed the relief this year got to keep an extra €121 in their pay cheque. Unlike a tax credit, which simply cuts the amount of tax you pay by that order, the benefit of a relief is dependent on the rate of tax you pay.

Clearly, the actual benefit to an employee – though still welcome – may be less than first thought.

Now, let’s contrast this shopkeeper with our higher earning hospital consultant, paying tax at the full rate and getting an expense relief of €695 a year. The net benefit to our doctor is €278 a year, or €5.35 a week. Their benefit from the regime is worth significantly more than it is for a low-income worker.

Another point to note is that, to benefit from the relief, you have to be paying tax in the first place. If you’re earning €16,501 or less, you won’t be paying any income tax (just the universal social charge) so can’t benefit from the tax relief.

The expense regime is far from perfect. Withdrawing the relief will hurt many low-income workers, as anything that shrinks their take-home income will. But the question of how equitable the regime is should also be considered.

Higher earners are not just entitled to a higher rate of relief – €695 for a hospital consultant versus €121 for a shop worker. By virtue of paying tax at the higher rate, they will also get double the relief available to those on lower incomes. And those paying no income tax because their incomes are so low will get no benefit at all.

Maybe it is time for a review.