John FitzGerald: What to expect from long-term Brexit effects 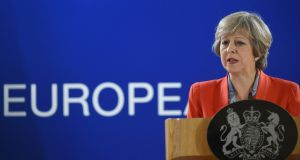 British prime minister Theresa May: the Irish experience shows the effects of a radical change in trade regime take many years to play out. Photograph: Stephane De Sakutin/Getty Images

The Celtic Tiger saw truly remarkable growth in living standards in Ireland from 1994 to 2003. We now know that the exceptional growth was allowed to continue too long during the bubble years, 2003-2007, storing up huge future problems.

Nonetheless, the standard of living in Ireland today is dramatically higher than it was 25 years ago, reflecting the fact that the Celtic Tiger years left a positive legacy.

As a result of the rapid expansion, in the late 1990s, foreign observers began to look at the Irish experience, seeking the elixir of eternal growth.

However, the really interesting story about the Irish economy was not the exceptional growth of the 1990s. Rather, it was how Ireland managed to do so badly for so long in the 50 years after independence, necessitating such a belated catch-up.

This poor performance reflected two serious policy mistakes: the failure to invest in education and the rejection of the benefits of free trade.

The neglect of education in the immediate post-war years contrasted with the major investment undertaken in all other countries in northern Europe, from Estonia to the UK.

In Ireland free secondary education was only introduced in 1967 and it was not till the 1980s and the 1990s that there was a major rise in participation in third level education. Because investment in education takes many years to mature, the policy failure of the late 1940s and the 1950s continued to haunt Ireland until the 1990s.

In the early years of independence, especially in the 1930s, successive governments developed a rigorous programme of protection, designed to produce a self-sufficient state where everything from shoe laces to cars had to be manufactured in Ireland. The small size of the Irish market meant that this was very inefficient.

In the aftermath of the Great Depression, similar policies were pursued in many other countries. However, in the years immediately after the nightmare of the second World War, the rest of western Europe woke up to the benefits of free trade. Ireland continued to languish in its own backwater.

By the second half of the 1950s it was clear to some observers that the failure to join the rest of western Europe in adopting free trade was to blame for Ireland’s economic distress, one consequence of which was the exceptional level of emigration.

Against this background, Ken Whitaker, as secretary of the Department of Finance, recommended a major change in policy direction. When this change was first mooted by Whitaker in 1957, Éamon de Valera was still taoiseach: the change in direction did not fit in with his philosophy. However, Seán Lemass took over in 1959 and, over the subsequent decade, he began opening the Irish economy to the outside world.

Progress was slow, so that it was not until 1973 that Ireland joined the EEC, giving it full access to the wider European market.

It took considerable time for the economy to adjust to the new regime. Jobs in existing industries, targeted at a purely domestic market, were lost, and it took time for new factories to be built to supply the new export markets. As a result, the standard of living improved quite slowly over the period 1960 to 1980; by 1980 Irish people enjoyed a standard of living equivalent to 55 per cent of that available in the UK, up from 40 per cent in 1960.

The homegrown economic crisis of the early 1980s halted further progress for over a decade and it was not till the early 1990s, when that crisis had finally been dealt with, that growth took off, rapidly raising the standard of living to the UK and the EU15 average by 2000.

The radical change in policy direction at the end of the 1950s, engineered by Whitaker, laid the foundations for the modern Irish economy.

However, the subsequent Irish experience also shows that the effects of a radical change in trade regime take many years to play out: reorienting an economy to focus on new markets requires huge investment.

This suggests that the effects of Brexit, involving a major change in trade regime for the UK, will also take many years to mature.

1 ‘Saudi Arabia is where the opportunities will happen in future’
2 MSD buys Takeda biologics plant in Dunboyne
3 How safe is it to go back to the office?
4 Project to identify spare intensive care beds accelerated by pandemic
5 Data centres will force State to choose between climate and investment
6 The first seven winners of Business Person of the Month
7 State’s biggest landlord records 30% rise in rental income
8 House prices fall 3% in three months, says MyHome.ie
9 Scars from the crash give Irish banks 2.6 billion reasons for Covid caution
10 BofI to cut 1,400 jobs as Covid-19 drives €937m loans charge
Real news has value SUBSCRIBE