John FitzGerald: Congestion charges may be the fairest way to tax road users

In the next few years, we will need to commit to a new tax regime for road transport 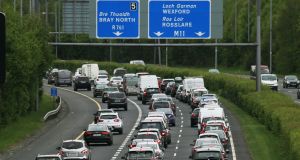 The establishment of the Irish Government Economic and Evaluation Service has increased the analytic capacity within the Departments of Finance and of Public Expenditure, as well as across individual departments where they are deployed.

The publication of their papers on their website makes important research underpinning public policy available to the wider public. The Tax Strategy Group was established in the mid-1990s, and involves officials and experts across departments examining the different options prior to the budget and Finance Bill.

This ability of departments to “think out loud” is very important. Very often they explore issues that are potentially embarrassing to the department’s political masters but it is widely accepted that the published analysis does not reflect the thinking of the Minister; rather it is the fruits of independent research which helps inform policymaking in the long term.

The recent batch of Tax Strategy Group papers published last month, covers wide-ranging aspects of the tax system. The taxation of road transport is one of the topics covered.

At present there are a series of taxes levied on transport – VAT, duties on new or imported cars, excise on fuel, carbon tax and the annual motor vehicle duty. Revenue from these sources accounts for about €5 billion or 7 per cent of total government revenue.

Currently there are significant tax incentives to buy electric cars. Electric car owners pay no excise tax on their fuel, so the gradual electrification of transport over the coming decade would see the government losing much of its road transport revenue. While the elimination of greenhouse gas emissions from road transport would be a great benefit, there would still be congestion, a need to pay for roads and a need for tax revenue.

Electric car owners pay no excise tax on their fuel, so the gradual electrification of transport would see the government losing much of its road transport revenue

Because of the slow take-up of electric cars, revenue for next year is not under threat. However, it is important for the future to put a sustainable tax regime in place for road transport, which will both provide the correct environmental incentives and raise appropriate revenue for government. Once much of the car fleet has been electrified and users are paying very little tax, making changes to the regime would dramatically increase their costs, making it very difficult to implement politically.

In a paper last year, the Department of Finance looked at an option of charging car owners according to the distance travelled rather than for fuel. However, this approach had a number of disadvantages. This year’s paper provides a more considered response.

If all of road transport were electrified, then cars and trucks would no longer emit greenhouse gases or other harmful substances, which would deal with one of the major side-effects for society – depending of course on how cleanly the electricity concerned would be generated. However, the social costs of traffic congestion would remain an issue. A tax on distance travelled would be a very blunt instrument for addressing congestion. A journey in an electric car from Belmullet to shop in Castlebar would generate almost no such problems, whereas a similar-distance commute into Dublin would add to current serious traffic jams in the city and its hinterland.

This year’s Tax Strategy Group paper considers a more sensible way of charging for an electrified road transport system by introducing some form of congestion charging. This would mean that those living in rural areas, who do not cause congestion, would pay less than today, while those in urban areas or who are commuters would pay more. That would encourage greater use of public transport in cities.

Other cities that have introduced congestion charging have seen tangible improvements in terms of reduced traffic and better air quality. For example, in London traffic, especially public transport, moves much more freely because of a reduction in congestion due to the congestion charge.

For the moment the options for alternative forms of taxation of transport remain in the realm of research. However, in the next few years, we will need to commit to a new tax regime for road transport which will deliver the necessary environmental changes and make our cities better places to live. There will be losers as well as gainers, though when tackling congestion most of the gainers from less congestion would be among those who end up paying more.