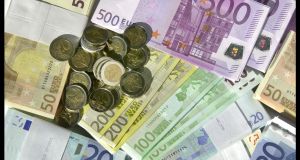 The increase in household wealth over the first quarter of 2019 was driven by households’ financial assets, which rose by €13.7 billion. Photograph: Alan Betson

Irish households are, on paper at least, richer than at any other time in the history of the State, according to the Central Bank.

The headline figure eclipses the boom-time pre-crash peak of €719 billion achieved in the second quarter of 2007.

It is, however, considered a crude measure of prosperity as it hides the distribution of household assets and liabilities across income groups and age categories.

Most of the net worth of Irish households is tied up in property, which has risen in value in recent years on the back of an undersupply. The latest figures show, however, the value of households’ housing assets actually fell by €2 billion in the first quarter of this year, reflecting the second quarter in a row of declining house prices.

The increase in household wealth over the quarter was driven by households’ financial assets, which rose by €13.7 billion, the Central Bank said, noting this was due to both improved valuations of these assets and rising investment by households.

The figures indicate household debt fell by €600 million to just under €137 billion, or €28,186 per person. Household debt is now at its lowest level since the third quarter of 2005.

The figures also show household debt as a proportion of disposable income fell by 2.9 percentage points, to stand at 119.8 per cent. The decline over the quarter was driven by an increase of 2.2 per cent in annualised disposable income, in addition to the decrease in debt.

While debt levels here have fallen since the low point of the crash, Irish households remain highly indebted by European standards.