The Government has taken the first steps in no-deal planning, but there is a lot still to do 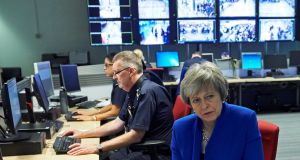 Effectively, a no-deal Brexit, changing the UK’s trading relationship with the EU overnight, would bring forward the expected Brexit hit into a much shorter timescale, requiring a crisis-management response. We are warned that this will require “difficult and significant choices”.

In other words, this could be nasty, would hit economic growth, cost jobs and potentially increase Government borrowing.

We have known that this is what Brexit might mean, but a no-deal Brexit brings the threat forward and adds significant uncertainty and risk.

Listen to businesses here and in the UK and you will be told in no uncertain terms that a no-deal Brexit simply cannot be allowed to happen, as the idea that you can get ready for such an eventuality is a fiction.

And yet this is where the politics has left us. The UK has upped its planning for a no-deal outcome, the European Commission has published some more of its plans, and Ireland has now followed.

The commission has made it clear that it will take some unilateral steps to limit the damage – making sure planes can fly and banks can continue to clear some transactions in London. But it says it will not collude with the UK in coming up with some kind of managed agreement to try to take the pain out of a no-deal. This keeps up the pressure on London to sign the withdrawal agreement, or find some other – workable – way forward.

Ireland is following the EU template, putting forward its own plans and trying to get companies to up their preparations and avail of the supports that are there to do so. While the latest documents outline a range of national and sectoral responses, there is still a lot more to do. The original Brexit plans were made on the basis that a withdrawal agreement would be signed, meaning there would be a transition period after the UK leaves the EU, lasting till at least December 2020. But in a no-deal exit, there would be no transition period and everything would change next March.

A lot of work remains to be done to get Ireland as ready as possible for such a scenario. Much of what was outlined yesterday involved meetings and taskforces – but we have still to hear how it might all work. And whatever preparations are in place, chaos would ensue if the UK leaves overnight. The rules of the customs union and single market simply cannot be switched off at 11pm on March 29th to be replaced immediately by something new,without massive fallout.Businesses in Ireland, like their counterparts in the UK, will be banging down the doors with this message in the weeks ahead.

A no-deal exit is now the default option. It is where we are heading unless a way can be found to stop it. The question is,if the withdrawal agreement is not concluded, can a way be found to avoid a chaotic no-deal exit?

Businesses insist this must happen, but politics has still to work out how.