Online purchases represented nearly half of spending in first weeks of May, figures show 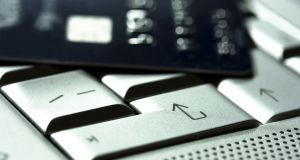 The Department of Finance said the shift to online may have partly offset the restrictions around physical shopping. Photograph: iStock

While the anti-coronavirus lockdown has prevented people from getting to the shops, it has not stopped many people from shopping. They’re just doing it online.

The exchequer returns for May released on Wednesday gave the first snapshot of the impact of the restrictions on the mindset of Irish consumers. May is a “VAT-due” month, the first since February. So the returns are the first set of official State figures to capture the impact of a full month of lockdown on activity.

The returns showed that that VAT receipts for May were down by about €820 million, or 35 per cent over the same month last year. This is a very sharp decline, but nowhere near as precipitous as had been expected.

If customers have been unable to get to the shops to do anything apart from grocery shopping, and with thoroughfares mostly shuttered anyway, what has driven this relatively resilient performance on VAT receipts?

The Department of Finance says that its analysis of “real-time payment transaction data shows that the pandemic has led to an increase in the proportion of expenditure carried out online”.

It says that online transactions accounted for “nearly 50 per cent of expenditure in the first weeks of May”, compared with a corresponding figure of 30 per cent for the early weeks of February.

“It may be the case that the shift to online has partly offset the restrictions around physical shopping, somewhat limiting the decline in VAT receipts,” says the department.

Many office workers have continued to work from home right through the restrictions, earning their usual income. Many other workers have been supported through wage subsidies and pandemic unemployment benefits that are higher than the usual dole. So they have sated their desire to spend at their laptops.

The corollary of this, however, is that much of that expenditure has leaked from indigenous operators to foreign online retailers such as Amazon. The trick for the State will be how to retrieve some of that activity once the restrictions are lifted.