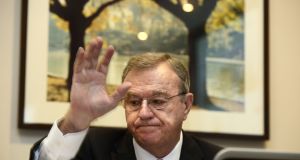 Losses before tax at Irish oil and gas explorer PetroNeft Resources narrowed to $4.5 million (€3.93 million) in the twelve months to the end of December 2016. The loss was softened by by a foreign exchange gain on intragroup loans.

In its full year report the company referred to last year as both “busy and challenging” as a significant oil field saw increased results. Licence 61, based in Russia, saw an increased output of 35 per cent compared to the previous year. Average gross production at the site was roughly 2,707 barrels of oil per day (bopd).

The Siberian-focused company saw revenue dip slightly by 4.9 per cent to $2.2 million as the cost of sales also dropped to just over $2 million from $2.3 million the previous year.

Drilling at another Russian site will commence in July of this year and its expected that Oil India will provide funding for that project by way of a shareholder loan to the company.

“The year ahead continues to present challenges but also some grounds for optimism. We have great support in our much valued partnership with Oil India.

“Together we see opportunities to strengthen and grow our Company through development and possibly acquisition”, said Dennis Francis, chief executive of PetroNeft Resources.

In a note to investors, analysts at Davy Stockbrokers said: “A combination of a low oil price and the poor result from a large step-out on the Sibrayevskoye Field was a difficult foundation for the group to work off.

“However, a successful shorter step-out in the same field, due to start shortly, and somewhat better oil pricing could make for a much better current year.”