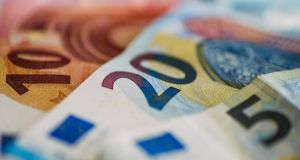 Household debt fell in the third quarter of 2018, reaching its lowest level in 13 years, according to the latest figures from the Central Bank.

The figures also showed debt sustainability continued to improve, with household debt as a proportion of disposable income falling two percentage points month-on-month to just under 126 per cent. That is the lowest point since the fourth quarter of 2003. Over the year, that figure was a decline of 11.1 percentage points, the largest decline among the most highly indebted EU countries.

Despite the decline in debt levels, compared to other EU countries, Irish households are still relatively highly indebted, the Central Bank said. The Republic now ranks fourth in terms of debt to disposable income; the most indebted country is Denmark.

Meanwhile, private sector debt as a proportion of GDP fell by 1.7 percentage points, reaching 239 per cent, its lowest level since the fourth quarter of 2007. This was attributed to rising GDP, although it was partially offset by an increase in non-financial corporations debt.