Department of Finance says, however, changes must not prejudice small economies 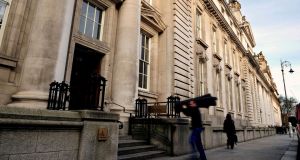 The Department of Finance building at Government Buildings in Dublin. “A certain, stable, and globally agreed international tax framework is vital to facilitate cross-border trade and investment,” the department said. Photograph: Aidan Crawley/Bloomberg

The Government has cautiously welcomed the latest moves by the Organisation for Economic Co-operation and Development (OECD) to overhaul the global tax system as part of a revision of the rules for the digital era.

However, it warned that any changes “should not disproportionately prejudice small open economies”.

In a policy note this week, the Washington-based OECD signalled that there was a growing consensus behind US proposals to ensure companies would pay taxes based on where they make their sales.

Currently the tax big companies such as Google and Facebook pay largely depends on where their assets, employees and head offices are located.

The OECD also signalled it was considering the concept of a minimum rate of tax across member states. The Republic’s 12.5 per cent rate, one of the lowest in the OECD, has been one of the main drivers of inward investment.

“Ireland recognises that further change to the international tax framework is necessary to ensure that we reach a stable global consensus for how and where companies should be taxed,” the Department of Finance said in its official response.

“A certain, stable, and globally agreed international tax framework is vital to facilitate cross-border trade and investment,” it added.

“From Ireland’s perspective, it is important that that whatever solutions are eventually agreed must continue to reflect the core principle that corporation tax is paid where value is created,” the department said.

In its policy note, the OECD presented several different avenues that might be adopted to overhaul the current system.

Among them were US-led proposals, which apparently have the backing of Brazil, China, India and other emerging economies, and are aimed at blocking companies from shifting profits from high tax jurisdictions to low tax ones.

The proposals are broadly in line with EU Commission proposals published last year.

Brussels has, however, gone one step further in proposing a new digital tax, levied at 3 per cent on EU-based digital sales, a measure that the Irish Government vehemently opposes.

As host to most of the largest digital brands in the world, the Republic has been at the centre of a international storm over tax, in particular multinational tax avoidance. Cross-border taxation is now one of the OECD’s main focuses.

As part of an overhaul of its tax code last year, the US included a provision to deter multinationals from avoiding US taxes by domiciling patents and other intangibles in low-tax jurisdictions.