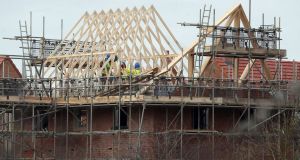 The average cost of building a three-bed semi-detached home in Dublin is €371,000 with construction costs accounting for less than half the overall. Photograph: Andrew Matthews/PA Wire

There’s a dreary predictability to reports from the property industry. They tend to say two things. First, there is a pent-up level of demand for housing in the economy, driven by deep-rooted demographic trends such as population growth and changes to household size, that can only be addressed through a massive pick-up in construction.

But – and here’s the second and seemingly contradictory point – the industry can only build at a certain price point because of high construction costs and strict regulatory requirements. As a result, the Government needs to step in and bridge the affordability gap between buyers and developers with more help-to-buy initiatives, thus ensuring the viability of the market.

The objective, of course, is to talk up the market for investors while warning the Government off doing anything radical, or anything that might upset the current price dynamics.

The upshot is no change or at least a continuation of what we’ve had since the 2008 financial crisis: housing dysfunction on a grand scale combined with irrelevant or counter-productive government policy.

The latest report from property industry body Irish Institutional Property (IIP), whose members include most of the biggest property firms and landlords in the State from Cairn Homes to Ires Reit, is a case in point.

It claims the State needs to build 47,000 new homes a year for at least five years just to meet demand. This is almost twice the 25,000 target set out in the Government’s Project Ireland 2040 plan, and more than twice the current level of supply, which was 21,000 last year, before Covid-19 hit. It’s also a throwback to the Celtic Tiger era, when we built en masse in the wrong areas, courtesy of reckless lending and throwaway tax breaks from government until a global credit crunch stopped us in our tracks.

The IIP analysis conducted by property economist Ronan Lyons bases its 47,000 figure on four key drivers of housing need: the natural increase in population (projected to be 18,500 a year); the continuing reduction in average household size (which creates the need for 12,500 units a year); net inward migration (put at 8,000 a year ); and a housing obsolescence rate (resulting in the loss of some 8,000 units a year).

“Ireland’s housing is out of line not only with its own demographics, but also compared to all other European countries, where typically 50 per cent of dwellings are apartments,” Lyons says.

There are a number of assumptions attached to these figures that may not been borne out. First, household size is assumed to be on a downward trajectory as Ireland moves more into line with its European neighbours, but it rose in the last population census of 2016. The population growth and inward migration figures are also based on certain assumptions about the economy, including ones tied into gross domestic product (GDP) that are fast withering in the face of the incoming Covid-19 downturn.

Experts also take issue with the assumed rate of obsolescence, which they claim is much less and maybe concentrated in areas with little or no housing demand.

The other obvious point to make is that the industry here doesn’t have the capacity to build 47,000 units a year, not in such a short space of time and not without rapidly inflating construction costs.

A cursory glance at property prices also tells us that headline inflation has dwindled away to almost nothing (0.1 per cent nationally according to the latest figures for June published on Tuesday) and is even negative (-0.7 per cent) in Dublin. Why is pent-up demand not driving this the other way?

Might it be that Ireland’s housing crisis has morphed from a supply crisis into an affordability crisis? People want to buy houses but can’t because their incomes don’t match up.

The report claims, however, that the supply of new homes is not determined by affordability for buyers but viability for developers, which it says is “extremely challenging”, particularly for apartments hence the need for subsidised schemes.

It says two-bedroom apartments in Dublin now cost up to €460,000 to build when land, VAT and levies are added to the traditional bricks and mortar construction costs.

At a media briefing to launch the report, Michael Stanley, the chief executive of housebuilder Cairn Homes, a member of IIP, said high construction costs had put housing in Dublin beyond the reach of a couple or an individual with a household income below €90,000. He said his company therefore could not supply an estimated 500,000 would-be buyers in Dublin with incomes of €40,000-€60,000 at a viable price.

The industry’s answer is to get the State to guarantee bigger loans, or divvy up part of the sales price via shared-equity or share-ownership schemes.

The one thing the report neatly eschews is any discussion of land values and why the costs of development can vary so greatly across the State. The only valid explanation for why this is much costlier in Dublin is because of land and developer expectations.

The Society of Chartered Surveyors Ireland (SCSI) recently put the cost of building a three-bed semi-detached home in Dublin at €371,000 with construction costs accounting for less than half the overall.

The problem with these reports is that they seem to prescribe solutions for the industry and not for the State, which are really no solutions at all.