Figures are again affected by financial flows related to multinationals 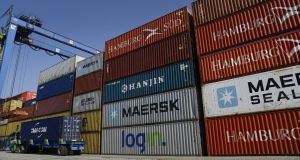 Ireland’s economic growth rate bounced back in the third quarter after a weak start to 2016, according to new figures from the Central Statistics Office (CSO).

However, the figures are again affected by the activities of multinationals, with a significantly slower rate of growth in the domestic economy than shown in the headline figures.

Gross domestic product (GDP) rose 4 per cent versus the second quarter, while gross national product (GNP), which strips out the effect of multinational profit repatriations, increased 3.2 per cent.

However, the latest figures were again influenced by financial flows related to big multinationals in Ireland involving the treatment of intellectual property and profit repatriations. This led to a large fall in the measured level of investment and also to a big drop in imports.

The CSO said that elsewhere investment increased, with a 3 per cent rise in spend on machinery, led by aircraft, and a 4.6 per cent jump in construction.

Commenting on the data, Dermot O’Leary, chief economist at Goodbody, said a more meaningful gauge than the GDP/GNP figures was core domestic demand, which shows the economy growing by about 3 per cent; still double that of the euro zone average.

The three largest sectors of the economy experienced growth during the third quarter, with industry rising 3.8 per cent in volume terms. Distribution, transport, software and communications increased 5.3 per cent, while “other services” grew 1.5 per cent.

Service exports increased €3.5 billion to €34.7 billion in the third quarter, driven by exports of computer services and business services, the CSO said. Capital investment fell 7.2 per cent on an annual basis.

Separately, the CSO said the current account balance of payments, a measure of Ireland’s financial flows with the rest of the world, is now at an all time high of 14.7 per cent at €10.1 billion. This compares to a surplus of €6.9 billion for the same quarter a year earlier.

Austin Hughes, chief economist at KBC, said the 4 per cent jump in third-quarter GDP was “largely technical”. However, he added that solid gains in household spending and construction suggested healthy domestic demand.

“There are also signs of a more cautious consumer, continuing catch-up in construction and tentative signs of some impact from sterling weakness on goods exports,” Mr Hughes added.

He said that personal spending and construction activity appeared to be holding up. However, he added that “Brexit” worries would likely intensify next year, leading to lower overall GDP growth in 2017.

1 How safe is it to go back to the office?
2 Elderly parents living in property you own will save you on capital gains tax
3 More than 40% of help-to-buy recipients already had deposit
4 Owner of Dundrum Town Centre to sell prized assets
5 Most workers now expect choice to work from home part-time
6 Construction workers among first PTSB borrowers off payment breaks
7 Can a first-time buyer get relief on a buy-to-let home?
8 Regeneron says its antibody cocktail prevents and treats Covid-19 in animals
9 Irish factory activity rebounds in July from lockdown lows
10 56 financial firms entered or expanded Irish operations in 2020
Real news has value SUBSCRIBE