For political reasons, the ECB and European Commission may have to undermine the very systems they introduced to prevent the possibility of another euro zone crisis 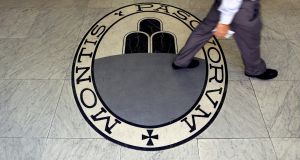 A man walks on the logo of the Monte dei Paschi di Siena bank in Rome. Photograph: Alessandro Bianchi/Reuters

With the European Union facing myriad challenges – from Brexit to migration – memories of the euro zone crisis seemed a thing of yesteryear. But the spectre of a resurgent financial crisis reared its head this week, as concerns about the health of the Italian banks moved centre-stage.

The decisive rejection of prime minister Matteo Renzi’s referendum on constitutional change had been priced into markets, but his resignation and its implications for the government’s already fragile bank recapitalisation plan immediately shunted international investor focus on to the banks.

Italy’s banks have long been the unresolved Achilles heel in the euro zone recovery.

Having done everything in their power to avoid a bank bailout for the euro zone’s third-largest economy at the height of the financial crisis, EU decision-makers have now been confronted with the reality of a banking system that managed to escape reform.

The country’s banks are creaking under the weight of €360 billion of non-performing loans, equivalent to more than a fifth of the country’s GDP. Profitability, as with banks across Europe, is low, while the Italian banking system is overloaded with too many small regional institutions.

Remarkably, ordinary savers were encouraged to invest in risky bank bonds at the height of the crisis, with the result that an estimated €200 billion of bank bonds are held by ordinary retail investors, including €5 billion of subordinated debt in the country’s third-largest bank, Monte dei Paschi di Siena, the oldest surviving bank in the world.

In what was unfortunate timing, Sunday’s referendum unfolded just as the Monte dei Paschi was in the midst of a sensitive capital-raising exercise, including a proposal to convince investors to swap bank debt for equity. Unsurprisingly, doubts have been now been raised about investors’ interest given political developments. A €1 billion anchor investment from the Qatar Investment Authority – without which the entire rescue might crumble – looks unlikely to get over the line by the end of the week.

Government intervention now looks likely. But this is complicated by EU bail-in rules. State aid rules, beefed up in the wake of the banking crisis, set out a strict hierarchy of creditors that must be bailed in before taxpayers’ money can be used to recapitalise banks. Similar rules underpin the much-feted bank resolution and recovery directive (BRRD), a method for resolving banks once a bank is deemed insolvent.

Both sets of rules were the subject of tough negotiations between member states in the wake of the crisis and were central to the EU’s promise to break the link between sovereign and banking debt – a key strand of the EU’s banking union proposal.

Analysts believe that some sort of exception for Italy will be worked out. As was the case at the height of the crisis, Italy is simply seen as too big to fail.

A precedent of sorts exists. In the lead-up to the European banking stress tests in July, the European Commission and Rome agreed a compromise plan whereby public funds could be injected into banks, together with a plan converting junior debt into equity and a compensation plan for retail investors.

Technically known as a “precautionary recapitalisation,” the idea is that this can help banks sidestep bail-in rules if they are recapitalising and strengthening their balance sheets as a result of stress tests.

Although the European Commission has declined to comment this week, except to confirm that it is in discussion with Italian authorities, this deal is understood still to be on the table.

Another option is a full-scale bailout from the euro zone’s rescue fund, the European Stability Mechanism (ESM), which continues to manage the Irish and other euro zone bailouts on behalf of member states. The Luxembourg-based fund denied reports in the Italian daily La Stampa on Wednesday that Italy was preparing a request for a €15 billion bailout.

Securing a specific bank bailout rather than a full rescue programme has a precedent. Spain secured a €40 billion rescue package for its banks in 2012 (though it originally requested €100 billion, which ultimately was not fully used), thus avoiding the kind of full bailout imposed on Ireland, Greece and Portugal.

Securing a bailout would also allow the European Central Bank (ECB) to invoke its Outright Monetary Transactions (OMT) programme, a tool that has never been used and only applies to countries in a bailout programme.

But a full banking bailout is seen as the least desirable political option as Europe tries to leave the memory of the euro zone crisis behind it.

More likely is some exception to the bail-in rules. But this is not without its drawbacks. A fudge would severely discredit the EU’s banking union concept, which now includes a single resolution authority to oversee bank resolutions and greater supervisory powers for the ECB over the euro zone’s banks.

Constructing a banking union was the euro zone’s main policy response as it attempted to strengthen its systems after the financial crisis. Undoing that as soon as the banking system hits its first hurdle would seriously discredit that response.

Italy’s banking woes are also likely to exacerbate tensions between Berlin and Frankfurt over the role of the ECB.

Germany was already unhappy with the quantitative easing programme launched by the bank in March 2015, suspicious that it was helping to shore up irresponsible economies, such as Italy, which instead, in Berlin’s view, should reform their economic and financial systems. The decision to extend the asset-purchase programme beyond next March is likely to rile many in Berlin.

Whatever the solution thrashed out in the coming days for Italy, markets are looking for decisive action.

Even if a rescue plan for Monte dei Paschi is agreed, other problems loom for the Italian banks. Unicredit is planning to raise about €13 billion as part of its restructuring plan, according to reports. The bank, Italy’s largest lender, has branches in 16 other countries, which is in itself causing worries for other member states.

EU finance ministers meeting in Brussels on Monday were quick to reject suggestions of a new euro zone crisis. Minister for Finance Michael Noonan echoed the sentiments of many, arguing that contagion was a “thing of the past”. But officials are privately nervous. As European ministers were calming nerves over the Italian banking system this week, they were also due to discuss the latest on the Greek bailout crisis. More than seven years after the start of the euro zone crisis, Greece’s problems have not gone away.

Negotiators are trying to finish the second review of Greece’s third bailout programme by Christmas, but uncertainty remains over the IMF’s involvement. While ministers agreed on short-term measures for Greece on Monday, it remains to be seen if this will be enough to convince the IMF to participate, or indeed to make a serious dent in the country’s massive debt repayments.

As Europe faces a series of crucial national elections across the continent next year, including those in France, the Netherlands and Germany, dealing with another financial crisis is not something it needs on the agenda.

Ultimately, the ECB and the European Commission are likely to do whatever it takes to stem the onset of another financial crisis, even if that means undermining the very rules and systems introduced to ensure another euro zone crisis never happens again.