Cliff Taylor: Is the era of ultra-low interest rates coming to an end?

Even if rock-bottom rates are on their way out, it will be a very slow death 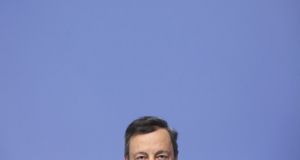 Mario Draghi knows the ECB must take great care in any move to unwind its stimulus programme. Photograph: Bloomberg

Are we watching the very slow death of the era of super-low interest rates? US long-term borrowing costs are already on the up, and the Federal Reserve Board, the US central bank, is expected to increase short-term rates again next week. Meanwhile the ECB announced on Thursday that it would reduce the monthly size of its monetary stimulus programme from next Spring, but extend its duration until December 2017, at least.

You could have a philosophical discussion about whether this involves the ECB starting to prepare for the eventual end of its quantitative easing programme. ECB president Mario Draghi was adamant that this was not “tapering” - a start to the run-down of its programme. In fact, the ECB said that it stands ready to extend the programme further, or increase its scale, if economic conditions require it to do so.

The financial markets couldn’t quite decide how to react, caught between focusing on the extension of the bond-buying programme and the news that its monthly scale would fall from €80 billion now to €60 billion from next April .

There are divergent views on the ECB council - a German-led group that is sceptical about QE and the extent of the ECB’s programme. There is no doubt that Draghi has yet again found a neat compromise to just about keep everybody on board. It remains to be seen how the markets will react over the next few weeks and whether - as events in Italy unfold - Government bond interest rates can remain around current levels . The ECB has been a big buyer of bonds, after all, and from next April will be buying less.

The ECB would like to be able to start unwinding its programme of monetary stimulus and then, over the next few years, look towards increasing interest rates. This is what the Fed has done, albeit not without difficulties, as its first signal that it was tapering its bond buying programme led to a major market upheaval in 2013, and it has only been able to edge up interest rates very slowly.

This is why the ECB has to tread very carefully in any unwinding of its monetary stimulus programme. If inflation does start to pick up next year, building anticipation of a real tapering of its programme, longer-term bond interest rates could start to increase quickly enough. But a rise in ECB short-term rates is still, markets reckon, some years away.

So in Europe, anyway, the era of super-low borrowing costs looks set for a very slow death, and there are even real questions about how much interest rates will increase in the years ahead, as the cycle finally turns. That said, bond markets react to expectations of future interest rates, and once investors believe that inflation is on the up - and that the end of ECB bond buying is coming - these longer-term rates could move quickly.

What does this mean for consumers? For those on tracker rates, the outlook remains just fine. For those on standard variable mortgage rates, it will be market competition that brings rates down - and some will continue to edge lower. That said, the structure of the market here means borrowers - with the exception of those on trackers - are generally not benefiting from the low costs of banks raising funds.

Sometime in the next few years ECB base rates will rise, but right now markets do not expect this until 2019, or 2020. Meanwhile the outlook for savers remains poor, but they have the consolation that inflation here is still completely flat and so the real value of their savings is not eroding.

We will all live with extraordinarily low rates for some time yet. But that may not stop the markets worrying about what comes next.