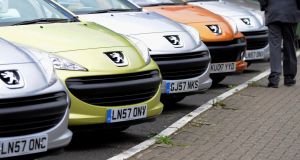 April car production in the eurozone fell 4.1 per cent against the previous monthly figure, dragging manufacturing down 0.8 per cent.

Industrial output in the euro zone dropped in April, hit particularly by falling car production, adding to concerns of a prolonged slowdown in the region that may in turn apply pressure on the central bank.

Monthly output dropped 0.5 per cent, compared with March, the regional statistics office said on Thursday, in line with a Reuters poll of analysts. The Eurostat March figure showed a decline of a revised 0.4 per cent.

“While volatile and not in itself a justification for more expansionary monetary policy, these numbers are a confirmation of a continued slowdown in the manufacturing sector which poses a threat to GDP growth if it continues for long enough,” said Bert Colijn, a senior economist at ING.

April car production in the 19-country bloc that uses the euro fell 4.1 per cent against the previous monthly figure, dragging manufacturing down 0.8 per cent. Output has been suffering since the second half of last year amid problems in Germany, where car production fell close to a decade low of 14 per cent annually. A slowdown in global trade has also hampered the region’s carmaking industry. Italy’s production fell 17 per cent.

UK car producers brought forward annual factory shutdowns to April from August in an effort to minimise their losses in the case that no deal is struck as the UK leaves the EU. The decision prompted the largest drop in production since records began in 1995. In an integrated production chain, this shutdown in the UK could be reflected in the euro zone data.

Last week, Mario Draghi, president of the European Central Bank, said that the bank was ready to “use all the instruments that are in the toolbox” if the malaise of the export-driven manufacturing sector was spreading to other parts of the economy. – Copyright The Financial Times Limited 2019

1 Three Ireland switches on 5G network around the country
2 U2 face closure of loophole they used to avoid paying their taxes
3 Should I switch bank now with Ulster Bank at risk of closing?
4 State should use Covid-19 impact on building costs to build homes
5 Am I paying too much for my buy-to-let mortgage?
6 Pilita Clark: The looming legal minefield of working from home
7 UK group secures €22m profit on Irish Nationwide's Dublin HQ
8 Doing the business
9 New car prices could rise by up to €10,000 if taxes increase in budget
10 Help, I’ve no PRSI stamps – can I still get a pension?
Real news has value SUBSCRIBE