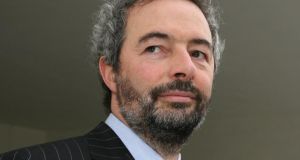 KBC Bank Ireland chief economist Austin Hughes: said the latest figures for consumer sentiment continued the pattern of “one and a half steps forward, one step back”.

In the absence of a “giveaway” budget, Irish consumer sentiment weakened slightly in October, as expectations for economic growth continue to lag US and euro-area peers.

Austin Hughes, chief economist of KBC Bank Ireland, said the latest figures continued the pattern of “one and a half steps forward, one step back” that has characterised the monthly sentiment survey readings for the past year or so.

“The October sentiment reading is slightly disappointing but not entirely surprising,” he said, adding that a still clouded economic outlook and the lack of marked gains in spending power meant consumer confidence remained fragile. However, he added that the broad trend remained “reasonably positive and consistent with an Irish economy that is experiencing an ongoing but uneven upswing”.

Conor O’Toole of the ESRI suggested that subdued views on personal finances may indicate that households are not experiencing a significant impact of the improving economy on their own circumstances.

A key inhibitor to consumer buoyancy is limited income growth, which means that “caution rather than confidence” is the key influence on Irish consumer behaviour at present Mr Hughes said.

The tenor of Irish sentiment contrasts with that elsewhere. In the US, for example, consumer sentiment posted its highest reading since January 2004 on upgraded views of household finances and the broader economy, while euro-area consumer confidence is at its strongest level since April 2001.

Mr Hughes said Irish consumers were suffering from a the lack of a self-reinforcing “feel-good” factor in the Irish economy that would drive confidence consistently higher.

“This reflects both the shadow cast by forces such as Brexit on the macro outlook and the scarring, both financial and psychological, that remains from the financial crisis.”

The KBC/ESRI report follows the Bank of Ireland Economic Pulse, which also showed that both consumer confidence and business sentiment remained subdued, with households and businesses in Dublin the most upbeat.