Planet Business: the weird and wonderful world of finance 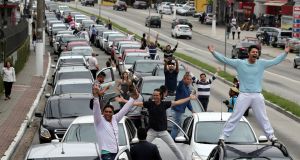 Uber drivers in Sao Paolo take a roof-top stand against legislation that they said would put them out of business. Photograph: Paulo Whitaker / Reuters

Percentage of butter demand in French supermarkets that wasn’t met between October 16th and 22nd by dairy producers, who can sell their butter abroad for higher prices than the fixed ones in French shops.

Percentage demand that wasn’t met in some stores, mostly due to hoarding, according to research firm Nielsen. The French butter shortage made headlines around the world this week, though this was mostly an excuse to linger on beautiful pictures of croissants.

Global price of butter per ton, having almost tripled from a price of €2,500 per ton in 2016, according to Paris-based farming consultants Agritel.

Image of the week: Stopping traffic

It all went a bit La La Land during a shape-throwing, car-top protest by Uber drivers in Sao Paulo, Brazil, on Monday. Drivers for the San Francisco-headquartered company were objecting to proposed legislation that would have required them to get a taxi licence plate, among other things, while similar traffic-snarling protests took place in Rio De Janeiro and Brazil’s capital Brasilia. Not leaving anything to chance, Uber chief executive Dara Khosrowshahi flew into the country – its third-largest market – for some last-minute lobbying. The bill was duly softened before passing.

This week’s hot news from the world of human resources comes from Tokyo marketing firm Piala, which has introduced a whole six days of additional leave for non-smokers to compensate them for the time that smokers were taking away from their desks for cigarette breaks. Piala’s head office is on the 29th floor and it takes 15 minutes to head to the basement level for a smoke and back, fuelling resentment among non-smokers. One of the bizarre things about this story is that the policy was apparently introduced as the result of a message left in a company suggestion box (proving there’s a first time for everything), while another is that the company opted for incentives rather than penalties. Four Piala employees have since quit smoking as a result, so everyone’s a winner.

Getting to know: Peter Plumb

Peter Plumb is the newish chief executive of Just Eat, the London-headquartered takeaway group or “leading global marketplace for online food delivery”, having joined it this summer after eight successful years at the helm of Moneysupermarket.com. In the process of showing consumers how to save money, Plumb made investors in the price comparison group even greater sums of money, though he started out his career as an engineer designing oil rigs in the 1980s. Just Eat posted an absolute feast of a financial update this week, suggesting this latest CV entry is a plum job for Plumb, but he’s landed there at a critical time, with competition from Deliveroo, UberEats and restaurants themselves heating up.

Forbes has marked Halloween in its own unique style, by publishing its annual list for the highest-earning dead celebrities. The highest ranked woman was actor Elizabeth Taylor in 12th place, proving that, even in death, a gender pay gap persists. The top five looked like this.

4. Elvis Presley: The King is worth $35 million this year, up $9 million after a bit of an extension at Graceland.

3. Charles Schulz: The “Peanuts” creator, who died in 2000, ranks third with $38 million, partly thanks to an advertising contact with US insurance group MetLife.

2. Arnold Palmer: The golfer was a dab hand at merchandising. Clothing and his eponymous soft drink (iced tea plus lemonade) earned $40 million for his estate.

1. Michael Jackson: The “King of Pop” is also this year’s King of Death, thanks to Las Vegas show Cirque du Soleil, West End musical Thriller and his stake in EMI’s music publishing catalogue. With takings of $75 million, Jackson earns as much as the 17th highest-earning living celebrity, Bruce Springsteen.

Aryzta shareholder raises stake in embattled bakery group 16:57
Premier Sports takes stake in JOE and Her Media 16:47
Ireland on course to be fastest growing economy in world in 2020 16:06
Penneys reports record sales in Irish stores after reopening 15:47
Ruling due in May on Leslie Buckley bid to have INM inspectors withdrawn 15:09