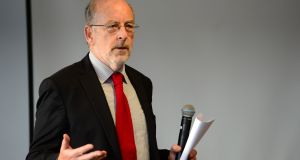 The State’s main 11 banks and building societies racked up a total of €140 billion in loan losses in the decade since western Europe’s worst property crash, according to data compiled by The Irish Times.

That equates to about three-quarters of the size of the Irish economy in 2008.

The figures include bad-loan charges that lenders took between 2008 and 2017, as well as losses on the sale of batches of loans to overseas investment firms and the National Asset Management Agency (Nama).

As Saturday marks the 10th anniversary of the snap guarantee of the Republic’s banking system, property developer Sean Mulryan and former Central Bank governor Patrick Honohan have warned in interviews with The Irish Times of risks facing the recovering housing market and State finances.

The guarantee of six Dublin-based lenders would cost taxpayers €64 billion in bailouts and tip the State into an international bailout. Foreign-owned Bank of Scotland (Ireland), Ulster Bank and KBC Bank Ireland also required multibillion-euro capital injections from their parents during the financial crisis.

The 11 banks’ net loan losses over the past decade amount to €134.2 billion – or 25 per cent of their total 2008 loans – according to the data, compiled from banks’ annual reports and regulatory filings.

That is after lenders released €5.56 billion that had previously been set aside for bad loans, thanks to a recovering economy and housing market.

Only five of the original lenders remain as standalone companies, as the State continues to grapple with the legacy of the crash. Housebuilding is running at half of estimated annual demand for 35,000 homes and banks are still dealing with high levels of distressed loans.

One of the highest-profile developers to come through the property crash, Mr Mulryan has warned that rising building costs pose the “biggest risk” to rebooting construction. The Ballymore Group founder said while the recently launched Land Development Agency, aimed initially at freeing up State lands to deliver 10,000 homes, should help cap land prices, he estimates building costs will soar by 7-10 per cent in each of the next two years.

“Because there aren’t enough tradesmen, they’re going to call the tune – and, by the way, builders’ suppliers are just going to go for it, too,” said Mr Mulryan, who exited Nama in late 2015 after his group repaid €3.2 billion in gross borrowings.

Meanwhile, Prof Honohan has added his voice to calls on the State to set aside windfalls from stronger-than-expected corporate tax receipts.

“This money is transitory,” he said. “You should save most of your transitory income – or at least spend only on one-time investments.”