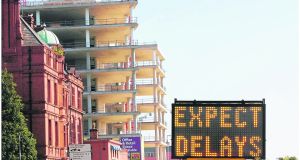 Image of the week. September 2010: Unfinished business at what was meant to have been the new headquarters of Anglo Irish Bank, and has since become the new Central Bank HQ. Photograph: Bryan O’Brien

Cost that the State has carried for the bailout of defunct lenders Anglo Irish Bank and Irish Nationwide Building Society.

Number of jobs lost across the Irish banking sector in the decade since 2008, following an unprecedented period of restructuring, retreats and implosions.

Approximate number of pages submitted by various institutions to the banking inquiry, the financial and political crisis postmortem that was established in November 2014 and sat for 106 days.

The banking crisis picture archive throws up many unexpected treasures. Politicians staging a tug-of-war outside Anglo Irish Bank’s headquarters on St Stephen’s Green. Other politicians dressed in hazmat suits to illustrate the toxicity of the bank’s debt. All the publicity shots for Anglo: The Musical. But this one, taken in September 2010, has got both the hubris and its glum unwinding, the rise and the fall. In the background sits the shell of what was meant to have become Anglo Irish Bank’s new headquarters on North Wall Quay in Dublin’s Docklands. The building was subject to a legal dispute between its developer (Liam Carroll) and a rival (Seán Dunne) before it became apparent that, well, Anglo just wasn’t going to need it anymore. Since just last year, the finished building is where the Central Bank seeks to fulfil what it calls its “increasingly complex mandate” – a key element of which involves ensuring that a disaster like Anglo never happens again.

The lexicon: Back to School Doombuster Party

The “Back to School Doombuster Party” was a party held for about 600 Anglo Irish Bank employees at the Mansion House on September 5th, 2008 – just three weeks before the government introduced the controversial bank guarantee in a bid to save Anglo from collapsing overnight. The party, organised by none other than Anglo chief executive David Drumm, was designed to lift the morale of staff and convince them that everything was grand and that the bank wasn’t struggling to fund its survival. The invitation read: “Dear colleague, the stock markets are down. They say the economy is in recession. It rained most of the ‘summer’. The holidays are over. This is Anglo so there is only one thing to do – party!” The €80,000 cost to the shebang was not actually a big splurge by Anglo standards and, though the €24,000 drinks bill must have triggered some vicious hangovers, arguably no amount of Prosecco could have obliterated the reality of the bank’s trajectory and busted that doom.

It was a “relatively low-key occasion”, reported The Irish Times, but it was a symbolic one: on April 20th, 2011, workmen removed the Anglo Irish Bank signs and logos from its Dublin head office and its branches in Dublin, Cork and Limerick in a co-ordinated operation instigated by post-nationalisation Anglo boss Mike Aynsley. This, wrote Simon Carswell in his book Anglo Republic: Inside the Bank That Broke Ireland, had been dubbed internally as the “Baghdad strategy”, in a nod to the day that US soldiers had pulled down the statue of Saddam Hussein after the fall of the Iraqi capital in April 2003. Eight years later, the pre-nationalisation Anglo regime was being linked through metaphor to Saddam’s. The removal of the signs, Aynsley suggested, would “give people an incredibly strong sense of finality in terms of the fate of this institution that has cost Ireland so dearly”. Whatever about a sense of finality, there was, at least, “a small cheer” and some beeping horns on St Stephen’s Green that afternoon.

Not everyone was rushing to accept responsibility for their part in the banking crisis and/or the hardship it caused, and those apologies that were forthcoming tended to come with qualifications attached.

1. Sean Fitzpatrick: “It would be very easy for me to say sorry,” said then Anglo chairman Fitzpatrick on Marian Finucane in October 2008, days after the Government’s decision to guarantee the banks. But… “the cause of our problems was global, so I can’t say sorry with any degree of sincerity and decency, but I do say thank you.”

2. Irish Banking Federation: “While the causes are many, there is full acknowledgment that the sector must take its share of responsibility for the crisis,” said then chief executive Pat Farrell in February 2009.

3. Brian Lenihan: When the then minister for finance was asked in June 2010 if an apology was due from Fianna Fáil, he said: “I certainly deeply regret what happened because there were decisions made that were wrong decisions. Yes, we did spend too much money and, yes, we did neglect our tax base.”

4. David Drumm: The now-jailed ex-Anglo boss hasn’t said sorry for any financial crime, but he did once “sincerely regret the offence” caused by the “terrible language” he used on the so-called Anglo tapes published by the Irish Independent in 2013. “I cannot change this now, but I can apologise to those who had to listen to it and who were understandably so offended by it.”

5. Brian Cowen: At the banking inquiry in 2015, the former taoiseach (and former golfing partner of Fitzpatrick) denied Fianna Fáil had mismanaged the economy, but he did regret the impact of his handling of the crash: “I am sorry that the policies we felt necessary to put in place in responding to the financial crisis brought with it hardship and distress to many people.”