John FitzGerald: More banks might have survived had more been foreign-owned 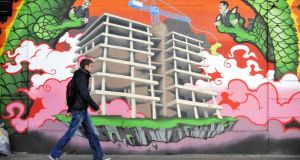 Ten years on from the bank crash, we still have something to learn from similar experiences elsewhere, and what has facilitated other banking systems to recover.

The United States has a series of regional economies whose banking operations are regulated by the relevant branch of the Federal Reserve Bank. In 1985, the banking system in the Kansas City Fed’s region suffered a major crisis. Legal restrictions had meant that the local banking system was dominated by small banks that did not operate in other US states. As a result, when the local economy crashed due to falling oil and agriculture prices – the two staples of the regional economy – the local banks also collapsed.

In response to this crisis, the local Fed sought two changes to make the regional banking system more secure in the future.

The Fed recommended the securitisation of mortgages, where they were sold on to financial institutions outside the region. This would reduce the risk to the local banks from a local property bust, and spread the risk to other institutions in the rest of the US.

The second solution was to allow US-wide banks to operate in the local region. Such regionally diversified banks would not be affected to the same degree by a regional economic crisis in the future, in the way purely local banks had been.

Ireland’s banking woes in 2008 also highlighted the problems posed in a regional economy when the banking system is very dependent on that economy. All the banks operating in Ireland were exposed to the Irish property bust but, because most were Irish-owned, it was the Irish people who largely had to pay to pick up the pieces. Some of the losers were bank shareholders whose investments vanished, but mainly it was ordinary taxpayers who paid a heavy price.

Foreign banks in Ireland also suffered major losses, with British-owned RBS (Ulster) being bailed out by the UK government. If more of the banking system had been foreign-owned, with a greater spread of activities across different countries, more banks might have weathered the storm and, where they did not, the fallout from bank failures for Ireland would have been minimised.

In Estonia the banking system was foreign owned. While they too had a property market collapse in 2008, because the banks were foreign owned they were bailed out by their head offices elsewhere in Scandinavia. The result was a more rapid economic recovery in Estonia than in Ireland.

While Spain also suffered a major banking crisis in 2008, its major bank, Banco Santander, weathered the crisis very well because the majority of its business was outside Spain: it was much less exposed to the huge local problems in the Spanish economy. So experience suggests that diversifying risk by operating in a number of different economies can reduce the dangers to a bank of a collapse in a regional economy.

Geographically diversified banks can also reduce the cost of borrowing for national economies. A 2011 ESRI/NIESR study indicated that an EU-wide banking system would have raised growth in economies such as Ireland and Portugal, because of enhanced competition and lower borrowing costs.

Of course diversification and scale are not foolproof against bank failure. Lehman’s has shown that even very large banks, when badly run, can fail, causing huge problems for the world economy.

A recent Central Bank paper by Valerie Herzberg and Peter McQuade shows how, as a result of the financial crisis, the banking system in the EU has become more nationally based, and hence more exposed to local economies.

In the crisis in each country, the local banking regulators clamped down on branches of foreign banks, to lock in funds to protect local depositors. This seriously damaged banks’ ability to use their geographical diversification to reduce exposure to local economies. For example, a very large Italian bank had to charge higher interest rates for an identical project on the Italian side of the border than it did in Austria.

The development of EU banking union is to be welcomed, though the task is not yet complete. The regulation of this system by the Single Supervisory Mechanism in Frankfurt should guard against failures by national regulators. When banking union is fully operational, it should enable the growth of geographically diversified banks operating across a number of EU countries, and protect taxpayers of individual countries from shouldering the costs of any failures on their own. That should lead to an EU-wide banking system that will provide similarly competitive services across the union.